It's Not Racist To Point Out That Eating Bats Is BatSh*t Crazy? 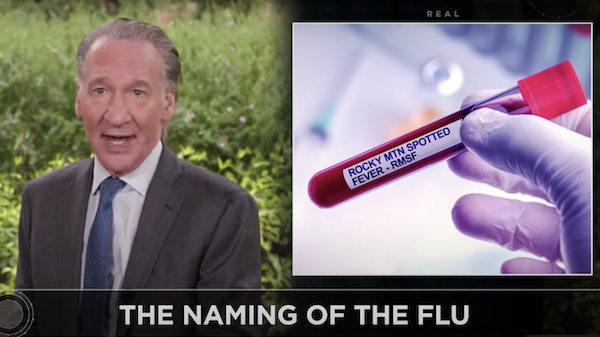 This week Bill Maher beat up China for its role in creating the COVID-19 pandemic.  He labeled the illness the China Virus and ignited a liberal firestorm.

Bill Maher, to his credit, is an equal-opportunity offender. That’s really all you can ask for out of a comic. Sure, his predictable dunking on any sort of religious belief gets more than a little tedious.

He seems to have the view that he’s Democrat first and American second. Which would explain why he was cheering the idea of a recession (which wouldn’t hurt HIM any) so that Trump could get turfed in November.

We call him out for some of his ridiculous partisan and Anti-American rhetoric from time to time, and we come to his defense when the Left turns on him for BBQing some of their sacred cows.

Altogether, he’s a talented comic, with a particularly well-honed ability to savagely ridicule. And in THIS clip, he’s calling out China for their role in sparking this health crisis in the first place… and calling out the Woke Left for caring more about calling the Wuflu a name that might ‘offend’ the Chinese than about the people actually fighting to breathe.

Be warned, if profane language bothers you, you may want to think twice before pressing play:

China is a dictatorship that, for decades, enforced a one child per family policy under penalty of forced sterilization. But they can't close down the farmer's market from hell? #CoronaVirus #WetMarkets pic.twitter.com/pvkfhdTk4i

“Jesus f–king Christ can’t we even have a pandemic without getting offended. When they name Lyme Disease after a town in Connecticut the locals didn’t get all ticked off (…) It scares me that there are people out there who would rather die of the virus than call it by the wrong name,” he said. “This isn’t about vilifying a culture. This is about facts.”

And how do you think the Left reacted to that?

Suffice to say their fainting couches got a workout.

And @thedailybeast is now calling Bill Maher racist for saying that China is to blame for Coronavirus. pic.twitter.com/KRVex1erl2

Does DailyBeast not know that kissing China’s ass won’t actually make Xi love them, or that he’ll never, NEVER, ask them to the Prom?

But Maher faced other critics:

He is difficult to listen to. I notice his anti-Chinese rant was in front of a non-audience. It does run contrary to the party line & the usual pap he feeds his live audience.

And one more word, this one from a comedy legend: