Bill Clinton: We’re Not Out Of Touch Because We Go To The Supermarket or Something Like That 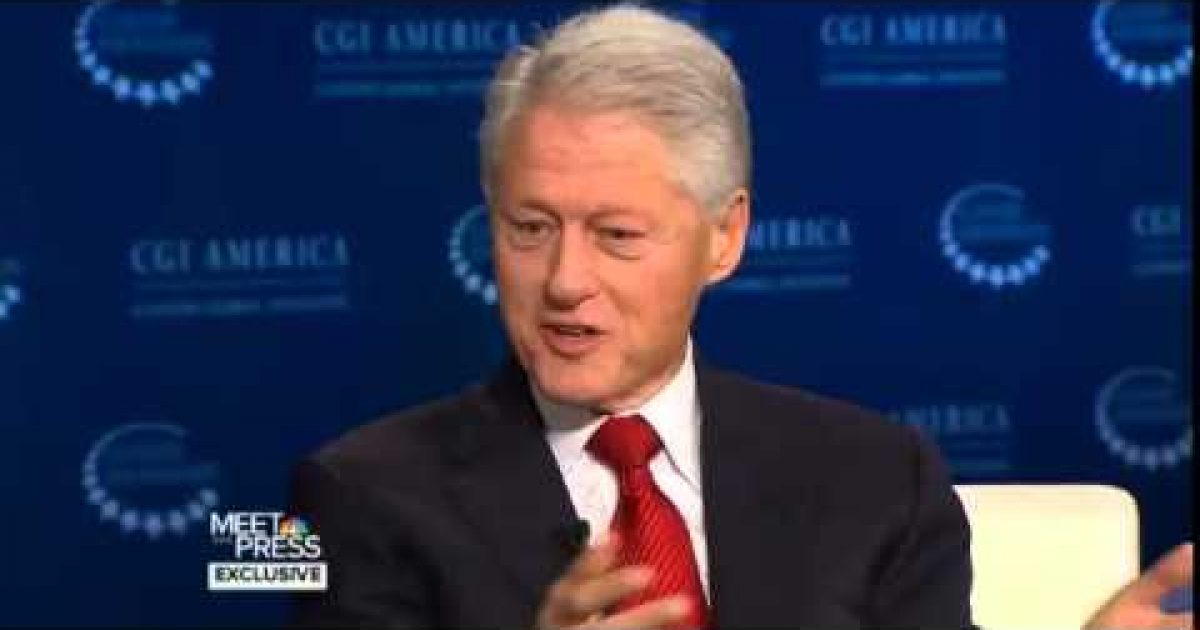 Facebook Twitter Flipboard
On Tuesday Bill Clinton tried to extricate his wife from the three week-long out of touch hole she dug for herself when she said she and her husband were dead broke when they left the White House and followed that up with they weren’t that rich because they paid income taxes. Daughter Chelsea added to the gaffe earlier this week when she toll other day when she told The UK Telegraph, “I was curious if I could care about [money] on some fundamental level, and I couldn’t.”

So Tuesday NBC’s David Gregory sat down with Bubba for an interview at the Clinton Global Initiative, and with both Hillary and Chelsea in the audience the former president bit his quivering lower lip and tried to fix Hillary’s gaffe.

It is factually true that we were several million dollars in debt,” Bill Clinton said in an interview airing this week on Meet the Press,
in reference to the millions in legal fees they racked up in the White
House. “Everybody now assumes that what happened in the intervening
years was automatic; I’m shocked that it’s happened. I’m shocked that
people still want me to come give talks.

The idea that now, after — I think I had the lowest net
worth of any American President in the 20th century when I took office,
but I still could have been tone-deaf,” said Clinton. “And, you know,
now I don’t, and we’ve got a good life, and I’m grateful for it. But we
go to our local grocery store on the weekend. We talk to people in our
town. We know what’s going on. The real issue is if you’ve been
fortunate enough to be successful, are you now out of touch and
insensitive to the agonizing struggles other people are facing? That’s
the real issue.

Truth is…of course she is out of touch.  When was the last time she was “regular people?” Hillary was first lady of Arkansas, first lady of the US, a US Senator, Secretary of State…etc.  Will anyone really believe she hangs out in the kitchen with “the girls,” drinking coffee and discussing her gripes with Chelsea? For God’s Sake the woman has had secret service protection since 1992. It’s been at least 22 years since Hillary or Bill has gone to the supermarket without being trailed by a guy with a white ear bud, packing heat.

This thing would have been over two weeks ago if Hillary was proud of being rich. If she said something like,

“This is the greatest country in the world. We’ve worked our butts off and made over $100 million bucks since we left the White House. Nowhere else in the world can this happen.  I’ve seen both sides in my life, that’s why I am dedicating my life to make sure we bring opportunity to those Americans who have not been as lucky as we have been.”

I guarantee that would work much better than “we go to the supermarket and buy our own Grey Poupon. “