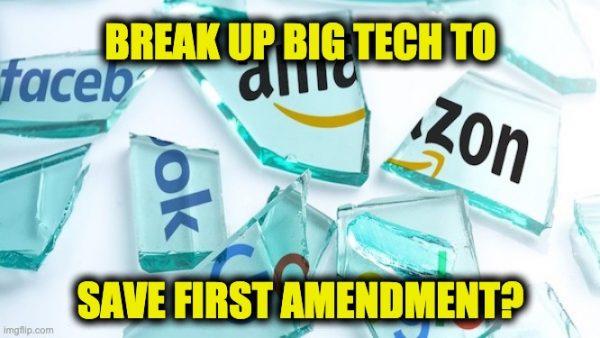 I post this as someone who has been banned from posting in Facebook groups till Dec.19th, for no apparent reason other than BWC: Blogging While Conservative. I agree with the poll. big tech political news

A new poll published by the Washington Examiner and conducted by YouGov finds that three out of four registered voters think that social media companies have way too much pull and influence over the kind of news that users see and read. A big part of the population believes these companies are politically biased (which solidifies my confidence in my fellow Americans).

Per the poll, 76 percent of individuals surveyed thought that social media companies have far too much influence. Only six percent thought they had too little, which IMHO defines the word imbecile.

These results come after social media giants Facebook and Twitter suppressed sharing a story about emails purportedly obtained from a computer belonging to Hunter Biden that could create political problems for his father, Democratic presidential nominee Joe Biden, shortly before the election. Republicans have charged Twitter and Facebook with making an “in-kind contribution” to Biden’s campaign by preventing users from sharing the news on their platforms. Conservatives have been pressing Senate Republicans to hold hearings on the social media companies’ handling of this story soon.

In the same poll, the public is split on the question of whether the former vice president has been honest about his son’s business activities in other countries.

A plurality of registered voters, 39%, believe social media bans have been biased against the Republican Party. This includes a huge majority of Republicans at 82% and a plurality of independents at 37%, though only 6% of Democrats agree.

As someone who has received those bans, I agree that they are biased against conservatives.

“Another 20% of registered voters believe that social media is biased against both parties. This includes 28% of Democrats and 26% of independents, though only 6% of Republicans agree,” W. James Antle III wrote in his report.

“Just 9% think social media content bans are biased against Democrats, with 2% of Republicans and 6% of independents agreeing. Even among Democrats, this figure stands at only 15%,” he continued.

A majority of the respondents (55%) said they supported Congress regulating social media companies to help curb potential bias– 25 percent said they shouldn’t, and 20 percent who weren’t sure. 69% of Republicans support Congress getting involved.

I believe just as they did with Google, the correct action would be to hit them with antitrust actions. Other types of regulations, including removing their section 230 protection against lawsuits, will only social media them to censor even more of our content. Section 230 of the Communications Decency Act says an “interactive computer service” can’t be treated as the publisher or speaker of third-party content. Thus they cannot be sued.

A total of 57 percent said that social media platforms should only restrict content they know for sure is false. But this is crazy also–political truth can be subjective.

At their points of origin, social media promised to be a free speech public square. While they still claim to be what they promised, they abandoned that concept years ago. They have become too big and powerful and A.G. Barr should be breaking them up.