And Probably Did It To Defeat Trump 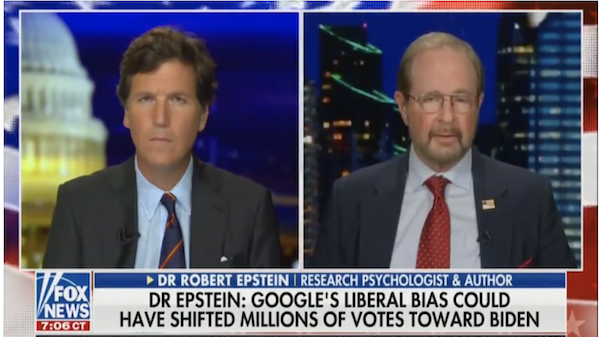 You didn’t really think Big Tech was planning to sit on the sidelines for this election, did you? They have been openly partisan, not just with their donations, but with who and what they target for suppression and removal and who they reminded to go vote. big tech manipulated elections

If even an anodyne PragerU message about the 10 commandments falls afoul of Silicon Valley’s censorship rules, but Antifa, Marxists, and leftists got to run wild.

They and the ‘free’ media together coordinated in their effort to take down a sitting President. Their overt suppression of a valid news story (Hunter’s connections to foreign money) was struck from the public conversation. Later polling showed that had that story seen the light of day, something like 5% of Democrats would have NOT voted for Biden on account of that story.

‘How do I change my vote’ was trending on Twitter that day.

But that wasn’t even the tip of the iceberg as Tucker’s guest Dr. Robert Epstein explains:

The politicization of COVID was another player, but not the big one.

Dr. Epstein, an acknowledged Democrat, predicted exactly this situation more than a year ago, claiming they would be able to shift 15 Million votes without a paper trail. He has studied the 2020 General election and has concluded that:

That, by itself, is more than the difference in the popular vote.

That 6 Million number is a direct quote.

Keep in mind, Epstein is writing this as a scientist, not a political pundit or a researcher. And since his preferred party is the beneficiary of this manipulation, his exposure of this runs counter to any personal biases he may have.

In other words, he’s clearly not putting a thumb on the scale to help someone he was already cheering for… a detail that increases credibility.

Epstein has been warning about this outcome for more than a year. And nothing happened.

Why don’t we hear more about this, and why was nothing done? He suggests a plausible reason.

Google literally buys candidates, and they offer large grants to many of his colleagues who might have the ability to study the facts and expose them.

People, as a rule, are often reluctant to bite the hand that feeds them.

Also, if you’re on the left, this has been helping your agenda. But liberals should think twice about that Faustian deal. There’s no guarantee they’ll support your side tomorrow.