Trump Was Right About The BIG Comeback Of The Economy 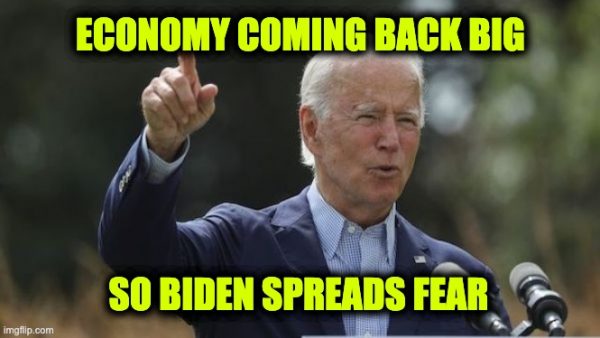 Biden’s claims about Trump’s failures are nearly as empty as his head is of any original thoughts. Now Joe’s feeble attempts to drag Trump on an economy that was artificially shut down by the Chinavirus are coming back to bite him. big economy comeback

The economy is on fire … in the best sense of the word. Biden’s narrative about it is unraveling.

Already seeing an end to the shortest bear market in history, we have seen consecutive months of record growth. This inconvenient truth has kneecapped the Biden COVID economy hatchet-job claims, that like so many other of Biden’s smears, conveniently cropped out the picture any facts disproving it.

Biden has been desperate to turn Trump’s strengths into perceived weaknesses… because his handlers know he doesn’t stand a chance in portraying himself as the superior candidate. His only shot is to tear Trump and his record down. And his team has made the risky calculation that they are willing to fudge the numbers to make that happen.

But what happens to Joe’s plan if we see recovery BEFORE the election?

Democrats are already lining up their best anti-vaxxer arguments to keep the general public afraid and hiding in their homes. Despite the best evidence that we have far less to fear about this virus now that we have a much better understanding of how to address it.

The supposed party of ‘science’ is now resorting to hokey fear-monger theories to keep people afraid so that they will need to elect Joe as their rescuer. That plan, too, falls apart if the public isn’t looking for someone to rescue it.

Which brings us to the latest economic numbers. A future that looks like this:

OCTOBER SURPRISE: Economists are now forecasting a blistering 25%-30% growth rate (a record) for Q3 real GDP, and that preliminary figure, showing a stunning Trump rebound from the COVID recession, will be released by the Commerce Dept on Oct 29 — just 5 days before Election Day

You see? We ARE seeing recovery before the election.

Now Joe is in a race to outrun the good news and get out the vote before the waves of fear he is hoping to ride eventually subside.

And why wouldn’t he? This is the same Joe Biden that screwed up his official response to H1N1 so badly that Obama’s people had to disavow one of Joe’s off the cuff statements so that he didn’t cause a panic that would crater air travel.

“I would tell members of my family — and I have — that I wouldn’t go anywhere in confined places now,” Vice President Joe Biden said today as he made the rounds of the morning TV news shows. “It’s not just going into Mexico. If you’re any place in a confined aircraft and one person sneezes, it goes all the way through the aircraft.”

…Update at 12:15 p.m. ET: The head of the Centers for Disease Control and Prevention says Biden is wrong.

“Vice President Biden’s comment that people should avoid air travel in response to the H1N1 flu outbreak was extremely disappointing,” ATA President and CEO James May says in a statement e-mailed to reporters. “The airlines have been working daily with government agencies, none of whom suggest people avoid air travel, unless they are not feeling well. The fact is that the air onboard a commercial aircraft is cleaner than that in most public buildings.”

Trump, on the other hand, is trying to help America see a future beyond these transitional setbacks associated with a virus we are so (seemingly) close to understanding and mastering. One where we return to the energy and optimism we had just a few short months ago.

Joe Biden may have the ‘bravado’ to call for a fictional fistfight behind the gym that he knows will never happen. But he lacks the moral courage to look at reality and deal with the world as it is, rather than how he wishes it were. To stare down a scenario like this virus and see an option besides endless retreat.

Trump already has details of the supply chain worked out for when the vaccine does become available. Because he’s accustomed to dealing with supply chains and problems at scale.

To borrow a line from history, Trump is not descended from fearful men.