How Bad Was Biden’s Warsaw Gaffe? 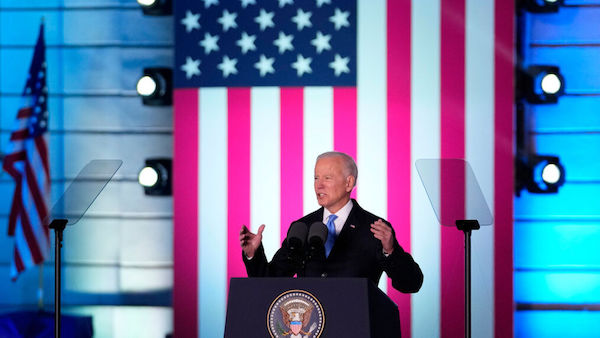 When President Joe Biden concluded his March 26 speech in Poland with a now-infamously ad-libbed statement about Russian President Vladimir Putin, pundits argued Biden was guilty of a gaffe that could lead to World War III.

White House staffers rushed to walk the president’s words back, assuring everyone that the United States would not pursue regime change in Russia.

Biden’s nine perfunctory words — after an emotional speech analogizing the current fight against Russian aggression to the Cold War — were straightforward. His amateurish staff erred by insisting he didn’t mean it. Putin is a despicable war criminal who bombs hospitals and sends innocent civilians to mass graves. Who wants him to remain in power?

Commentary Magazine’s Noah Rothman, with whom I usually agree, did not like the president’s statement.

“It was throat-clearing that could only further destabilize the situation in Eastern Europe, as evidenced by an administration-wide to clean up after the president’s intemperate remark,” he wrote last week. “While it’s sometimes welcome, it is not the president’s job to be a beacon of moral clarity. His role is to establish America’s national interests as discretely as possible and behave in ways that advance those objectives. Throughout this crisis, Biden has let his mouth get in the way of that imperative.”

While a president’s words absolutely matter, did Biden’s unscripted comments matter that much or lead us down a dangerous path?

His suggestion of regime change — much like new sanctions — is unlikely to affect Putin’s ignominious efforts. When the rogue Russian justified his country’s abominable Ukrainian invasion, he accused the U.S. and others of trying “to put the final squeeze on us, finish us off, and utterly destroy us.”

Ironically, Democrats most often complain about Republican presidents’ rhetoric on the global stage — from President Ronald Reagan’s dubbing the Soviet Union an “evil empire”; to George W. Bush rightly calling Iraq, Iran, and North Korea an “axis of evil”; to the many provocations from Donald Trump.

Biden and Putin won’t be talking amiably like Reagan and Mikhail Gorbachev or Trump and Chinese Chairman Xi, but that’s because of Putin’s abhorrent actions, not Biden’s Warsaw utterance.

Team Biden has unified most Democrats and members of the NATO alliance to provide critical military aid to Ukraine — without entangling any nation directly in military conflict or, heaven forbid, placing boots on the ground.

Except for a foolhardy new congressman and a few cable news hosts, Republicans are united in supporting the Ukrainian resistance. That mostly means sending weapons systems and proper training.

Yet the American public still does not credit Biden with leadership in Ukraine.

I surmise it’s because they don’t believe his heart or his party are in the fight. Despite the lack of media coverage and focus on the GOP, the far left has shown no interest in combating Putin.

Maybe that’s also because Biden delivered a haphazard State of the Union address five short weeks ago that began with a defense of Ukraine and democracy. Still, the bulk of his one-hour speech was a laundry list of nonsensical progressive policy wishes that Americans don’t want.

Americans want a focus on the economy, national security endeavors, and yes, maybe even some regime change (in Washington this fall). But they still do not trust Joe Biden.