Will Biden’s ‘You Ain’t Black’ Error Force His V.P. Pick? 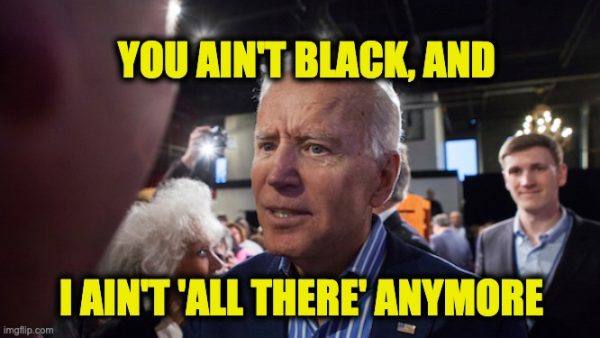 The guy who ran the interview where Biden shot himself has heard Biden’s excuses… and he’s not buying them. Biden’s V.P. pick

Charlemagne Tha God, who interviewed Biden when he made that catastrophic self-own about people who still have questions about whether or not to vote for Biden ‘Ain’t Black’ took his turn as a guest on Joy Reid’s show.

To say Biden’s ‘apology’ left him underwhelmed is an understatement.

He explained why in his interview:

Asked if there’s a “risk” that Biden and the Democratic Party as a whole take the black vote for granted, Charlamagne said, “I know that’s the attitude. That’s why I don’t ever care about the words and the lip service and the apology is cool, but the best apology is actually a black agenda.”

“They’ve got to make some real policy commitments to black people,” he continued. “We’ve got to stop acting like the fact that blacks are overrepresented in America when it comes to welfare, poverty, unemployment, homelessness, drug addiction, crime, coronavirus—that’s no accident. The whole function of systemic racism is to marginalize black people.”

On one side, Charlamagne said he sees “whites telling us to stay in our place” and on the other, “black people saying, ‘Oh, stop, now is not the time, you’re going to get Trump re-elected.’” He said, “It has to come to the point where we stop putting the burden on black voters and start putting the burden on Democrats to show up for black voters.”

Charlamagne made clear both in his interview with Biden and on MSNBC Sunday morning that Biden picking a progressive black female running mate would go a long way towards demonstrating his commitment to that community. So Reid asked him what he will do if Biden picks someone like Amy Klobuchar instead.

“On top of possible Russian interference and voter suppression, they have to worry about voter depression,” he replied. “And that’s people staying home on election day because they aren’t enthused by the candidate. You can’t act like this is the most important election ever but run a campaign from your basement and not make some real policy commitments to the black community and not listen to some of the demands that the black community are making. I think people are sitting around hoping that Trump loses instead of going out there and actually beating him.”

Biden has really stepped in it. During that interview with Charlemagne Biden also said he’s always gotten endorsements from the NAACP, but that’s not true. The organization released a statement  explaining:

“Yesterday, former Vice President Joe Biden made a comment about the NAACP’s endorsement. We want to clarify that the NAACP is a non-partisan organization and does not endorse candidates for political office at any level.

And so far as the radio host, Charlemagne is concerned, Biden’s only way of getting back in the good graces of the black voters he’s offended is to pick a black Veep to prove his worth.

Byron York agrees that Jim Crowe Joe is under extra pressure, “He has already said that he’s guaranteed to choose a woman. And he’s under increasing pressure now for it to be a woman of color.”

Apparently, the confidence Biden may have in getting a pass simply because he was Barack’s veep choice doesn’t seem very well-founded, does it?

In all his time leading a Woke party has he STILL not figured out that the goalposts keep moving? That anything you may have done for ‘the cause’ yesterday is forgotten? It’s right in the name ‘Progressive’ — only the new demands of tomorrow matter.

One — choose a Veep explicitly motivated by considerations of skin color and gender… and risk being labeled as an empty panderer with no core principles. Hardly a strong quality among real leaders.

Two — risk alienating the black voting block upon which Democrat voting strongholds are so very dependent. A loss of even a few points, or apathetic voters staying home could be the difference in many Democrat strongholds between staying blue or flipping red.

Not an enviable choice.

All because he made that unforced error.