Here’s How It Will Work Unless It’s Stopped 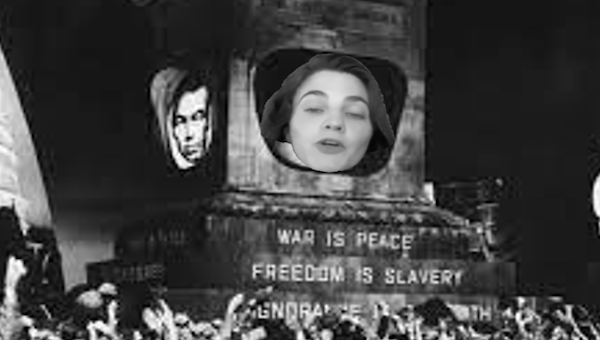 Joe Biden’s “Disinformation Control Board,” also known by many as the “Ministry of Truth,” is much more frightening and dangerous… than we initially thought.

Here’s how the new Ministry of Truth actually works…

News from Obama – Biden regime officials during the final week of April about a new “Disinformation Control Board” and the person running it initially resulted in some shock and then laughter. Laughter is borne from a feeling it won’t have much actual power and could be easily stopped. It’s anything but funny, however. And it’s much more devious and clever than we realized.

Since it’s derived from the fictional “Ministry of Truth” in George Orwell’s novel “1984,” let’s call it that.

The name of the director is not so simple. We’re not allowed to say “women,” Since we’re not biologists, we don’t even know what a woman is.

We can’t say birthing person in this case, since “men” have been shown by the Obama – Biden regime to give birth, despite what science and biology say.  So far, I have not met a biological man who has gotten pregnant, let alone given birth.

Not being able to describe the director in other ways, why not use the suggestion of the biblical scholarship board: Jezebel.

This doesn’t fit exactly, but it’s good enough for this horrifying news report on how the Ministry of Truth works. Actually, all I know about this person is that she sings nicely, and apparently, we both like Gilbert and Sullivan.  She did sing a song asking who she would have to have f**k  to get ahead.

An example is better than a theory.

On April 27th, in testimony before Congress, the Director of none other than the Department of Homeland Security, Alejandro Mayorkas, sought to put us to sleep about the possible dangers of the new organization.

Mayorkas stated that it would not conduct surveillance of American citizens but instead deal with “Misinformation and Disinformation” from threats to US national security such as the drug cartels on the border and foreign powers, which are enemies.

At first, that doesn’t seem so bad, but it’s what happens after that wherein the problem lies.

Let us say Jezebel discovers that the criminal cartels on the southern border are spreading information that “the border is open.”  And that the cartels do this to increase their human smuggling and drug smuggling effectiveness.  In the long run, this helps provide desperate Democrats with more potential voters.

The next step in the Ministry of Truth is to brand the statement “the border is open” as “disinformation.”

Immediately, we see that the Ministry of Truth determines what a lie is and what is truth in all matters related to drug cartels and foreign enemies. That alone is a very evil power. And a great power because these impact every single American and every single news organization and political party.

Can Jezebel Determine The Truth From A Lie?

It’s doubtful that Jezebel could actually do a good job at that. Previously she stated that the Hunter Biden laptop was Russian disinformation. Background information from Mayorkas and other Obama – Biden regime spokes-birthing persons (e.g., Psaki) are that Jezebel springs from The Woodrow Wilson International Center for Scholars. A semi-government organization think tank related to policy matters.

On second thought, we remember that Woodrow Wilson, while a hero to the Democrat Party Progressives, was a virulent racist and segregationist.

And not just in theory. When Wilson became president, the United States had a non-segregated civil service. Black and White Americans worked at desks along side each other in Washington DC.

Wilson immediately changed this and, by Executive Order, re-segregated the government civil service. This caused bizarre results because concrete and marble office buildings did not allow easy segregation of people by race. For example, US Post Office administrative offices were huge rooms.

This Woodrow Wilson had cages built out of wood (which makes his crime easier to remember). Black people were put in wooden cages to separate them from the White people.

Anyway, this is from whence the Jezebel comes.

The Next Step, After Identifying “Disinformation” From Cartels And Foreign Enemies

Jezebel and her hordes of flying bat-like minions have discovered that the cartels are saying, writing, and putting on social media… that the US southern border is open.

This actually happens to be the case. It happens to be a fact. But it’s an inconvenient truth for the Obama – Biden regime. Therefore the knowledge that the US southern border is open must be crushed.

Here is where the conservative media, where the ordinary citizen, comes under the boots of the Ministry of Truth.

Anyone repeating or stating, or speaking about an “open border” will be automatically considered as spreading disinformation/misinformation. In other words, working as an accomplice to the cartels.

The whole justice system, the constitutional protections of the right to trial, and the status of innocence until and unless proven guilty in a court of law goes out the window. By fiat, decree, and Fatwa of the Ministry of Truth, of Jezebel, speech becomes criminalized… even if it is factual.

This is totalitarian and must be stopped using the law and other means within the law.

What Happens To Those People, Media, Conservative Constitutional Organizations Designated As Re-Spreading Disinformation Of The Cartels Or Foreign Enemy States?

In George Orwell’s classic novel, “1984,” the Ministry of Love takes over. According to experts in American Literature in our universities today, that would be the so-called “Department of Justice.”

There at the Ministry of Love, people are detained and tortured to various degrees. Slow or fast. In fact, just like those who peacefully walked into the Capitol Building on January 6th have been imprisoned and, yes, tortured and abused, without due process, for two years.

For totally break those accused by the Ministry of Truth of spreading disinformation of cartels/foreign enemy states, the next step is sending them to ROOM 101 (according to the novel “1984”).

There, the worst type of torture takes place. After which, the innocent yet tortured victim becomes incapable of functioning. A sort of death sentence. A living death. They are released out to the general public and disappear among the homeless.

This totalitarian suppression of free speech is as evil as in Stalinist Russia. And all done with a stroke of the pen by the regime of His Lying Demented Fraudulence, Dictator-Wannabe Joe “Applesauce Brains” Biden.

Free speech is gone, and constitutional rights to protect citizens from arbitrary imprisonment are gone.

The Ministry of Truth is very dangerous and an end to freedom. The United States becomes somewhat akin to Putin’s Russia, where “misinformation” about the “Special Military Operation” in Ukraine is landing Russian citizens in immediate imprisonment without due process… and for 15 years. Many will never make it out at the other end of the 15 years.

Thus, The Ministry of Truth, as presented by Mayorkas and other spokespeople of the evil Biden regime, has been presented by disinformation itself. By a cheap magician’s trick, sleight-of-hand drawing out attention away from what’s really happening.