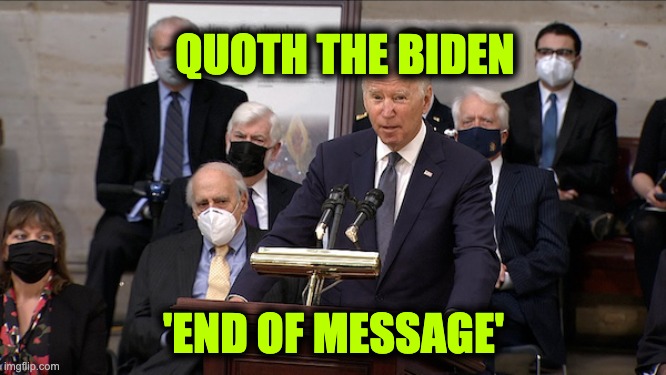 While giving a eulogy for former Sen. Bob Dole (R-KS)., on Capitol Hill this Thursday, dementia Joe Biden had yet another one of his famous declining brain moments, reading what were apparently instructions inserted into his notes. Biden’s declining brain

Here’s what he said, according to the official White House transcript (Emphasis added):

“When we prioritize principles over party and humanity over personal legacy” — when we do that, we “accomplish far more as a nation. By leading with shared faith in each other, we become America at its best.” He went on to say, “a beacon of hope, a source of comfort in crisis, a shield against those who threaten freedom.”

“Our nation has certainly faced periods of division. But at the end of the day, we have always found ways to come together. We can find that unity again.”

And then the message said, end of message.

My fellow Americans, America has lost one of our greatest patriots. We may follow his wisdom, I hope, and his timeless truth. But the truth of the matter is: As divided as we are, the only way forward for democracy is unity, consensus — the only way. May we follow his wisdom and his timeless truth and reach consensus on the basic fundamental principles we all agree on.

This type of gaffe has become common for the dementia-riddled President. For example, speaking about the supply chain crisis two days before Thanksgiving. Reading off the teleprompter, he quoted the CEO of Walmart and made sure everyone knew it was a quote;

“And, by the way, you may have heard the CEO of Walmart yesterday on the steps we’ve taken. He said and I quote ‘The combination of private enterprise and government working together has been really successful.’

“He went on to say, ‘All the way through the supply chain, there’s a lot of innovation. Because of the actions we’ve taken, things have begun to change.’ End of quote.”

Joe Biden is losing his mental faculties, and as he once said to Barack Obama,  This is a big f**king deal!”