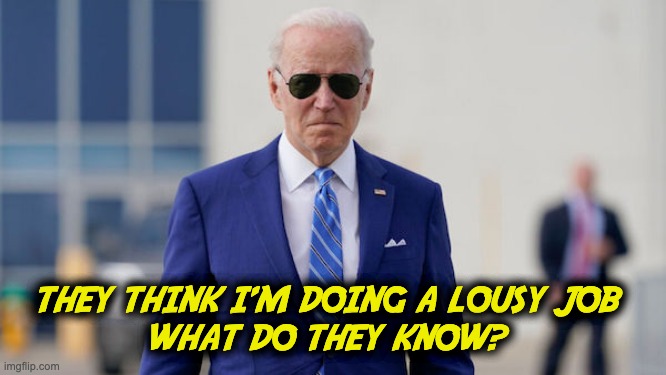 Joe Biden now has the lowest approval ratings of any president in modern history. Yet the media is practically ignoring the story.

The poll of 1,412 adults released on Wednesday also shows that a whopping 54% disapprove of Biden, with only 13% saying they have no opinion.

Along party lines, 76% of Democrats surveyed approved of Biden’s job performance, while 94% of Republicans disapproved.

Among Independents, 56% approved and 26% disapproved – in a midterm election year in which their votes for Democrats or Republicans running in congressional, state and local elections will be critical.

Among registered voters surveyed by Quinnipiac, 35% approved of Biden’s job performance, while 55% disapproved and 10% offered no opinion.

Those numbers make me wonder if the 35% of registered voters who approved of Biden had some sort of head injury that dulled their mental capabilities.

As USA Today reported in September of last year, Trump’s lowest rating was his brief 2017 rating of 34 percent. Trump spent most of his presidency above 45 percent.

Remember how the leftist media continued to claim that Trump was the “most unpopular president in history ?” Even if you believed those reports, the latest poll shows that Trump has fallen to number two. Something that he won’t be upset about.

Notice how they are practically silent about Biden, who is now even lower than Trump?

And remember, Biden has really only been in a few months longer than a single year!

The poll was conducted April 7-11 with a 2.6 percentage point margin of error.