Biden Gives Fallon An Unbelievable Excuse For His Poor Approval

This May Be The Lamest Excuse Yet! 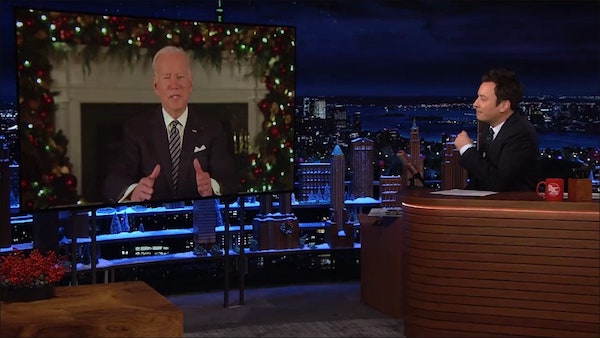 The Commander in Chief didn’t appear all that enthusiastic about even running for office in 2020 and was seemingly goaded into the nomination by a Democratic Party who was more concerned with beating Donald Trump than actually governing.  Since taking the oath, Biden has done little to garner confidence in any contrary opinion.

Now, as his approval rating predictably sinks to nigh unprecedented levels, the President has proffered a pathetic excuse for it.

President Joe Biden continues to get poor ratings from the American people on his presidency, prompting the president to blame misinformation and coronavirus anxiety.

Fallon started off by signaling that it would be a softball interview with, “You are bringing the class back to the office.” Since Biden was on the show via zoom, Fallon didn’t bend over and kiss Biden on his butt. But it sounded like he wished he could.

Fallon brought up those poor ratings.

Biden laughed off his poor approval numbers during a virtual appearance with Tonight Show host Jimmy Fallon, joking that he did not even look at them anymore.

“I was paying attention when they were in the mid-60s, but now that they’re in the 40s, I don’t pay attention.”

But he ultimately blamed the ongoing coronavirus pandemic for making people upset with his job performance.

“Look people are afraid. People are worried. And people are getting so much inaccurate information,” he said, talking about the economy. “They’re being told that Armageddon is on the way.”

A President who cannot take responsibility for his own inaction and lack of popularity doesn’t inspire a great deal of confidence. We have to wonder whether or not this boo-hoo blame game won’t further tarnish the national opinion of Joe Biden.

Much of this post was first seen at Flag and Cross. Biden’s approval excuse