Bidenflation Is Destroying The Middle Class; Is It Being Done On Purpose? 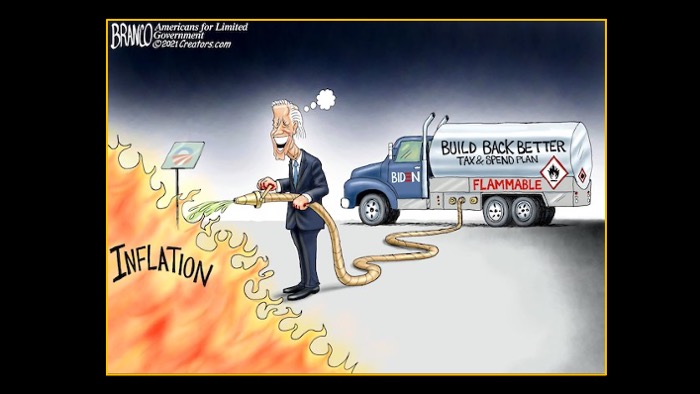 Americans have more money in their pockets than they ever have before.  That sounds like great news, but it isn’t because the cost of living is rising much faster than our incomes.  In addition, much of the “new wealth” created over the past couple of years has ended up in the hands of the very wealthy, which has caused the gap between the rich and the poor to grow even more expansive.  As for the middle class is being systematically hollowed out by “Bidenflation,” and that process is only going to accelerate during the early stages of 2022.

I don’t like to use the term “Bidenflation” too much because it is not entirely accurate.  Without a doubt, the Biden administration has taken actions repeatedly that have made the inflation crisis even worse.  But it isn’t as if Joe Biden and his minions are the only ones responsible for this mess.

The creation of the Federal Reserve in 1913 started us down the road we are on today.  Of course, we could have exited this path at any time if U.S. voters had sent politicians to Washington that were committed to abolishing the Federal Reserve, but they didn’t do that.

In 1971, we reached “the beginning of the end” when President Nixon took the U.S. off the gold standard.  Today, the value of the U.S. dollar is only a tiny fraction of what it was back then.

The U.S. national debt hit a trillion dollars in the early 1980s, and it will hit the 30 trillion dollar mark in 2022.  Our politicians have literally been committing national financial suicide, and both major parties are to blame.

In 2009, the Federal Reserve took the destruction of our currency to an entirely new level when they introduced “quantitative easing.”  It was supposed to just be a “temporary measure,” but of course, the Fed just kept doing it.

Over the past couple of years, the Federal Reserve has pumped more fresh money into our financial system than ever before, which has greatly pleased investors.

But it is also turning our currency into a joke.

Earlier today, I read an email from a reader that was quite alarmed that many new car dealers are now charging $5,000 to $10,000 above the sticker price for many of their vehicles.

Of course, they can get such prices because we are now in a hyperinflationary environment.

Used vehicle prices have been rising very aggressively as well.  In fact, Jim Bianco says that they have been going up even faster than Bitcoin…

Used auto prices are rising faster than bitcoin and other assets, according to market researcher Jim Bianco.

“If you want to know what the best investment you probably had in 2021, it’s that car sitting in your driveway or in that garage,” the Bianco Research President told CNBC’s “Trading Nation” on Thursday. “It is appreciating faster than the stock market and lately faster than some cryptocurrencies.”

Over the past four months alone, the price of used vehicles has increased more than 20 percent…

“In the last four months, they’ve gone up in price more than 20%. Not only is that more than the S&P, but over the last four months that’s more than bitcoin itself,” he said. “As of December 15, the latest set of data we’ve got, they’re just accelerating higher and higher right now. There’s no peak at least as of now.”

In fact, CNN is reporting that at the end of the third quarter, U.S. home prices were up almost 20 percent compared to the same time in 2020…

Homeowners saw average home prices skyrocket nearly 20% through the third quarter compared to a year ago, according to the Federal Housing Finance Agency. It was the largest annual home price increase in the history of the agency’s House Price Index. And, in some hot markets, the price increase was double that.

If your income hasn’t also gone up 20 percent over the past year, that means that you are falling behind.

Today, half a million dollars will get you a 700 square foot shack.

Over the next 12 months, Zillow foresees U.S. home prices rising 11% overall. While that would mark a slowdown from the 19.5% jump over the most recently measured 12-month window (between September 2020 and September 2021), the predicted price increase would still be a housing market that strongly favors sellers. For perspective, Fortune calculates the average rate of home price growth per year has been 4.6% since 1980.

The amount of money in our pockets is not what matters.

Just look at Venezuela.  Almost everyone in Venezuela is a “millionaire,” but nearly everyone in the entire country lives in poverty because the money is virtually worthless.

And we are headed down the exact same path.

The standard of living for the vast majority of Americans is eroding a little bit more with each passing day, but for the moment, those at the very top of the economic food chain are doing great.  In fact, they are buying more champagne than ever before…

Champagne sales are surging to record highs as 2021 comes to an end (back above what they were before the COVID pandemic hampered sales and kept people away from celebrations).

Sales in 2021 are expected to top 5.5 billion euros ($6.2 billion), above a previous peak of 5 billion euros two years ago before the coronavirus pandemic, Jean-Marie Barillere, president of champagne industry group UMC, said.

I hope they enjoy these moments because their laughter will turn to mourning soon enough.

People like me have been warning what would happen if we kept systematically destroying our currency for years and years.

But our leaders in Washington just kept doing it anyway.

Now a time of reckoning is upon us, and it will be so incredibly painful.