Bidenflation Will Cost Each Family an Extra $5,000 Per Year 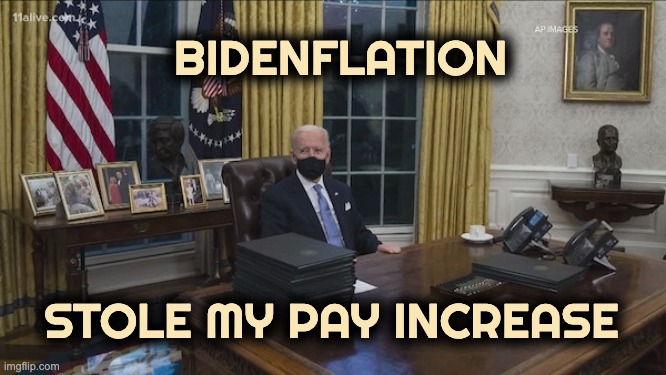 Joe Biden’s disastrous economy will cost every American family dearly by the time 2022 is over. Indeed, it’ll sap more than $5K from our pockets.

According to a new review by Bloomberg, Bidenflation will end up costing American families at least $433 extra a month in higher costs for gas, food, utilities, and other expenses. That’s $5,200 a year.

Bloomberg tried to make it sound better by claiming that many Americans would be able to rely on the money they saved during the recent pandemic lockdowns. But even with that, the left-wing news site was forced to admit that Bidenflation will wipe out those savings (if any were even amassed in the first place).

Inflation is a “tax” on the American people, ad what we’ve seen from job reports is that increased wages are being eaten by the accelerating inflation.

The excess savings built up over the pandemic, and increases in wages, will cushion those costs, and allow spending to expand at a decent pace this year. But accelerated depletion of savings will increase the urgency for those staying on the sidelines to join the labor force, and the resulting increase in labor supply will likely dampen wage growth

Bloomberg also floated the fantasy that wage increases will help alleviate the Bidenflation trap. But, again, there won’t really be any wage increases. What company will give wage increases when people fear losing their job because prices for goods have soared?

According to a University of Michigan consumer sentiment survey, 32 percent of Americans expect their financial condition to deteriorate in 2022, likely because of inflation. Only 16 percent of Americans believe Biden’s policies will rectify the economic problems. “That will make fighting inflation harder because so much of inflation depends upon psychology and expectations,” Breitbart News reported.

Only one good thing might come from Biden’s destruction of the economy. We just might see a red wave bring hundreds of new Republicans to office in the 2022 midterms in November.