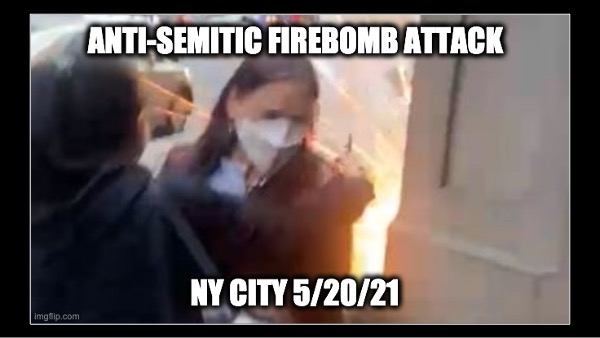 Last night a ceasefire went into effect that could conclude nearly two weeks of fighting between Israel and Hamas terrorists. The Islamist cabal has fired about 4,500 rockets at Israel since May 10.

While many wonder whether Iran-backed Hamas will oblige, we also wonder why President Joe Biden has not been more outspoken, not only in supporting our chief ally in the Middle East, Israel but in condemning violence against Jews in America.

Each year, FBI stats show Jews are overwhelmingly the victims of more anti-religious “hate crimes” than any ethnoreligious group. And these numbers continue in May, ironically Jewish American Heritage Month.

The same day across the country in the nation’s other left-wing epicenter emboldened anti-Israel radicals attacked innocent bystanders in New York City. And a few blocks south, a mob screaming “Allahu Akbar” violently assaulted a Jewish man, leaving him bloodied from the head.

Attempted lynching of a Jewish man in New York.

This should be literally everywhere. pic.twitter.com/JmMGf7i8TQ

These types of heinous attacks by thugs also occurred in Arizona and New Mexico.

Just to our north, the worst Antisemitism in generations continues in Toronto, the cesspool of Canada.

Europe is awash in anti-Jewish crimes, including the assault of a rabbi in notoriously anti-Semitic London.

Are the anti-Semitic attacks being discussed on Twitter? Of Course not, or as they say in Brooklyn, “fuhgeddaboudit.”

Nothing in trends on Twitter over attacks on Jews in New York City. There is this however. pic.twitter.com/yGqXYjBqAi

Republicans are speaking out:

The anti-Semitic violence we’re seeing in the United States and Europe is reprehensible.

Sadly, this #antiSemitism is being encouraged by radical Islamic terrorists and the angry Left. pic.twitter.com/gRq29RCazb

Where is Biden on this matter? He gave a perfunctory speech Thursday evening, mentioning nothing about the past fortnight of anti-Jewish attacks. In contrast, he signed a bill hours earlier to supposedly curb crimes against Asian Americans and infamously stepped into other racial grievances, like policing.

A simple presidential address saying he is disgusted by anti-Semitic violence and it must be stopped would be so easy and necessary.

“It is a vicious hate. Jews being beaten up. Jews being attacked. It’s insane what’s going on and there’s not enough of a reaction,” Dov Hikind, chairman of Americans Against Antisemitism, said Thursday. “They have been empowered. Let’s keep in mind, who are they supporting? They support a terrorist group Hamas, an organization that openly, not secretly, is dedicated to the destruction of the State of Israel. They don’t want Jews there, period.”

Hikind then added, “Democrats in America, let me say this very clearly, they are empowering Hamas. Hamas is thrilled with Bernie Sanders and with AOC and Tlaib and Omar.”

Indeed they are, as the deranged Sanders does everything he can to make the Jewish State suffer.

So halfwit leftists like Rep. Ayanna Pressley somehow made a racial game out of the Middle East conflict. I’ll remind her that half of Israelis are not white; they’re “brown” or Sephardic. They hail from North Africa and Asia Minor. “White colonizers” they are not; a tiny minority group in America, they are.

But even though Jews vote Democrat heavily, don’t expect the Biden administration to care.

“There are significant, influential American intellectual publications whose websites right now have nothing about the wave of street violence against Jews–not a word–and where the Mideast conflict isn’t happening. It’s incredibly disorienting,” Washington Examiner Executive Editor Seth Mandel tweeted.

Hamas is always at war with Israel. It would be nice if Jews could at least feel safe in urban America.

A.J. Kaufman is a senior columnist for Alpha News. A former school teacher, military historian, and author of three books, his writings have been featured in the Baltimore Sun, Florida Sun-Sentinel, Indianapolis Star, Minneapolis Star Tribune, Orange County Register, Real Clear Politics, St. Cloud Times, and across the internet. Catch Kaufman every other Monday on The Ed Morrissey Show.

Related Story: Democratic Party Reaction To Israel-Hamas War: F**k the Jews They Will Vote For Us Anyway