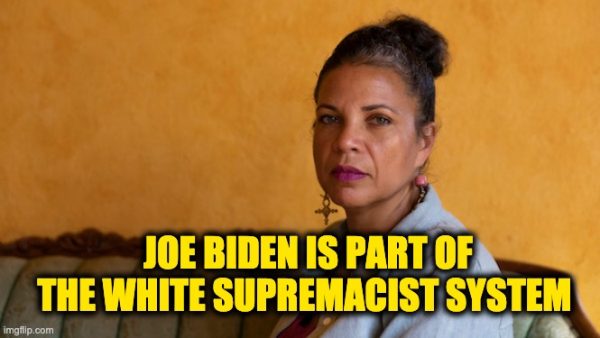 Abdullah made the comments during an interview with ABC News.

The report addressed how Black Lives Matter could impact the 2020 election.

“People are feeling dismayed that the choices are between, you know, a violent white supremacist and another person who represents that same system,” she claimed.

“I think sometimes, Joe Biden and [President Donald] Trump, and our party on both sides are blinded by the struggles that the lower end of Americans are feeling today,” Nathaniel suggested.

This past summer, Abdullah attacked the President after he called a Black Lives Matter mural in New York City, a “symbol of hate.”

“Maybe our GREAT Police, who have been neutralized and scorned by a mayor who hates [and] disrespects them, won’t let this symbol of hate be affixed to New York’s greatest street,” Trump objected.

“Spend this money fighting crime instead!”

….horrible BLM chant, “Pigs In A Blanket, Fry ‘Em Like Bacon”. Maybe our GREAT Police, who have been neutralized and scorned by a mayor who hates & disrespects them, won’t let this symbol of hate be affixed to New York’s greatest street. Spend this money fighting crime instead!

“I think we need to remember who he is — that Donald Trump is the embodiment of white supremacist terrorism,” Abdullah responded in an interview with CNN.

“I think it’s the height of hypocrisy for Donald Trump to call anything a symbol of hate,” she added. “He is the embodiment of hate.”

Neither Biden nor Trump are part of a “violent white supremacist” system, though the former has had his struggles in courting the Black Lives Matter vote.

Biden told a popular African American radio host that anyone struggling to decide between him and Trump in the general election “ain’t black.”

Reminder: Joe Biden was the one who told Black voters that if they vote for Trump over Biden, “You ain’t black.”

Biden claims to care about Black voters, but in his 47 years, his policies have done nothing for them.pic.twitter.com/FK4LyLvDGd

In a more recent blunder, Biden claimed people were able to quarantine during the pandemic because “some Black woman was able to stack the grocery shelf.”

BIDEN: "The American people–They're saying, 'Jeez, the reason I was able to stay sequestered in my home is because some black woman was able to stack the grocery shelf.'" pic.twitter.com/fYWHYSdkSX

This past weekend, hundreds of ‘walkaway’ Trump supporters filled the streets of Washington, D.C., and encouraged the ‘silent majority’ to stand tall just weeks before the election.

The group’s founder, Brandon Straka, points out that they represent all different types of backgrounds, including the black community.

“We want people to see that we are every slice of America – gay, straight, transgender black, white, brown marching together, loving one another, loving this country, loving our president,” Straka said.