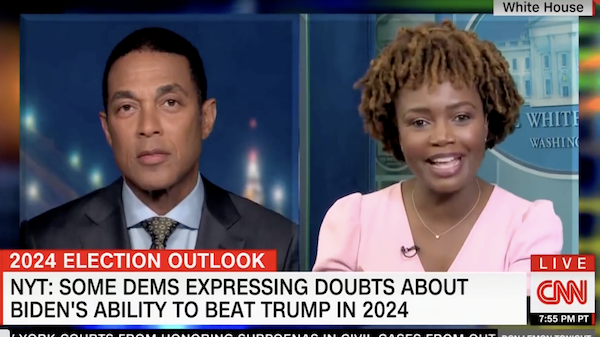 Over the course of the last week or two, there has been a drastic shift in Democratic messaging regarding the 2024 election, and the White House seems to have taken some offense to it.

We’ve known for some time that the Democratic Party has been developing a rift, an abscess of putrid political puss in which the party is wrestling with other on-scale-tipping liberal ideologies.

But now, on top of this thematic creasing, the party at large is attempting to deter Joe Biden from running for reelection in 2024.  This is something that the White House is not taking kindly to.

The White House repeated that President Joe Biden did plan on running for reelection in 2024, despite growing questions about his age and economic record.

White House press secretary Karine Jean-Pierre fired off a message on social media about the president’s political plans for the future.

“To be clear, as the President has said repeatedly, he plans to run in 2024,” she wrote on Monday evening.

Earlier Monday, Jean-Pierre tried to ward off questions about the president’s future political plans by alluding to the Hatch act.

“I cannot talk about elections, I cannot be a political analyst from here, or the midterms or anything like that including 2024,” she said during the White House press briefing when asked by a reporter about Biden’s political future.

Monday evening Jean-Pierre was on liberal extremist Don Lemon’s  show on CNN. Lemon asked, ” Does the president has the stamina physically and mentally do you think to continue on even after 2024?’

Her response was the corporate line:

“Oh, my gosh, he’s the President of the United States, you know, he — I can’t even keep up with him [does that mean he is forgetting where he is and keeps wandering off] We just got back from New Mexico, we just got back from California … just look at the work that he does, and look what he’s, how he’s delivering for the American public”

Later on she answered the “is he running in 2024” question. Well kind of.

Not a firm yes.

A number of prominent Democrats have recently suggested that Joe Biden should not be seeking reelection, including members of the DNC.

Additionally, progressive starlet Alexandria Ocasio-Cortez was unable to answer a good question about her support for Biden’s reelection either, demonstrating the vastness of this sentiment within the ever-more divided party.