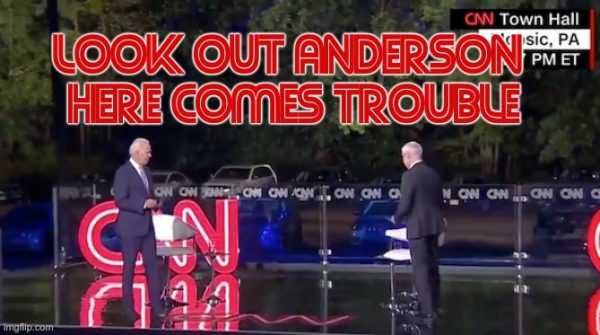 Former SCHMOTUS and 2020 Democratic nominee Joe Biden has been doing a great deal of work to paint himself as whatever the “opposite” of the President is.  This is his only real election plan:  Be the candidate that isn’t Donald Trump. And while this may work for some younger voters, it’s a hands-off message that he’s sending, which doesn’t bode well for confidence in a Commander in Chief.

So, when it comes to the coronavirus crisis, Biden has taken all of his cues from Trump.  Where the President doesn’t wear a mask, Biden does so reflexively.  When Trump expresses optimism about the state of a COVID vaccine, Biden brings the doomy, gloomy outlook. While Trump’s actions display the seriousness of COVID, Biden downplays the virus.   Trump gets physically close to people who have tested negative to COVID while Biden maintains social distance.

Well, Biden maintains distance when he thinks the cameras are on.

Joe Biden emphasized social distancing during his CNN town hall meeting on Thursday, but when he thought he was off-camera, he violated his own rule.

Biden and moderator Anderson Cooper were positioned a significant distance apart on the outdoor stage in Moosic, Pennsylvania.

As Cooper went to a break, the camera panned out to show the crowd, and Biden could be seen approaching Cooper – closer than six feet – and appeared to be close enough to whisper in his ear.

But on the bright side, he didn’t seem to be smelling his hair.

LOL! @CNN, @AC360, and @JoeBiden are pretend practicing social distancing at tonight’s #CNNTownHall, but watch what happens when they think the cameras are off and you can’t see them anymore!

Biden’s hypocrisy was astounding, particularly after several of his answers expressed his deep concerns regarding the coronavirus crisis and the government’s response.

“I cannot mandate people wearing masks,” he said, acknowledging his previous call for a national mask mandate was unconstitutional.

“I would call every governor in the country into the White House; say, you should be putting mandates out. And if they don’t, I’d call the mayors in their towns, in their cities and say, put out mandates,” Biden said.

“I would like to see the governors enforce mask wearing, period. I can do that on federal property. As president, I will do that. On federal land, I’d have the authority,” he continued.

President Trump has been fond of calling the left side of the aisle the “Do Nothing Democrats”, but perhaps they are better described as the “Do As I Say, Not As I Do Democrats”.