UN-deported: Biden May Fly Illegals BACK Into USA After They Were Already Deported

The Theme Song For His Administration Should Be The Hit Song Of The Beatles, “Back In The USSR.” 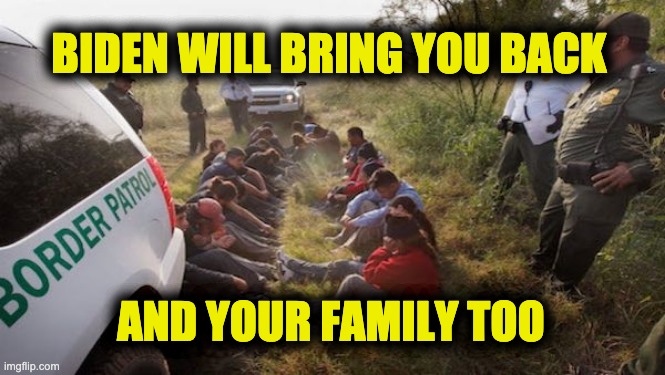 The Biden administration is preparing to reverse deport thousands of illegals who have already been sent back to their home countries, all at the expense of the U.S. taxpayers. Following his campaign promise, President Trump deported over 900k illegal aliens. Continuing with his plans to reverse whatever Trump did, reports now say that Joe Biden is preparing to institute plans created by a group named the National Immigrant Justice Center, shared with Biden, that advocates “undeporting” tens of thousands deported during the Trump administration. Biden to undeport illegals

“The plan asks the government to take into account factors like people who were eligible for legal status and had applied before being deported or those who have compelling circumstances.

The proposal has been shared with White House staff, the group said. It plans to invite Homeland Security Secretary Alejandro Mayorkas to discuss the proposal and include a letter signed by 75 immigrants’ rights organizations supporting the plan.

A White House spokesperson referred questions about the proposal to the Department of Homeland Security, which did not immediately respond,

Advocates point to how the government has started reunifying families that the Trump administration separated at the border under its “zero-tolerance” policy.”

“We have deported hundreds of thousands of individuals, and to do that and not even have an effective safety valve to review bad decisions violates due process,” said Nayna Gupta, associate director of policy for the National Immigrant Justice Center.

Not only is Biden allowing just anyone to cross the border regardless of their status or personal stories, now he is actually sending operative into foreign countries to scoop up illegals and bring them here of his own volition!

When one adds Biden’s socialist and his open borders policies to this recommendation to undeport illegal aliens, the theme song for his administration should be the hit song of The Beatles, “Back in the USSR.”