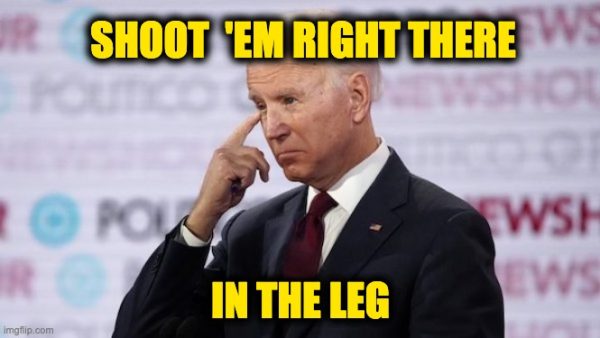 I am not a police officer, nor have I ever gone through police training, but even my uneducated mind knows that Joe Biden’s suggestion that police officers be trained to de-escalate situations involving dangerous suspects by shooting them in the leg is imbecilic.

Rather than shoot to kill in self-defense, Biden proposed wounding them instead. “Most cops don’t like bad cops,” he said. “You can ban chokeholds, but beyond that, you have to teach them how to de-escalate circumstances.”

What Biden is proposing will lead to more dead cops and more dead innocent bystanders.

“So instead of anybody coming at you and the first thing you do is shoot to kill, you shoot them in the leg,” Biden concluded.

Biden is suggesting that instead of aiming for a big stationary target like the criminal’s chest, go for a tiny moving target like the leg. In other words, make it more likely that even a sharpshooting officer misses the target.

Joe, it’s real-life, not a crime drama. A cop doesn’t use the lethal force of shooting a criminal unless it’s needed and justified. The gun is not used as a scare tactic; it’s used as a last resort to save lives. Most police officers go through their whole careers of 20, 30, or more years and never discharge their weapons. But there is always a chance of being confronted by a bad guy with a gun.

Social media’s response to Biden’s proposal indicates disagreement from many who saw the town hall comments.

Fox News contributor Katie Pavlich tweeted that the idea proves “he has zero idea how police training or responding to a violent threat works.”

Biden just suggested police shoot people in the leg, proving he has zero idea how police training or responding to a violent threat works.

“Spoken like a true moron who has never spent a moment in law enforcement,” he tweeted.

Spoken like a true moron who has never spent a moment in law enforcement. ???? https://t.co/vkQfFqsXP8

Biden is lucky that tweet was soft-spoken compared to Dan Bongino’s usual rants.

The scene shows an enraged man who charges them. He is seemingly incapacitated when one officer shoots him but eventually regroups, gets a chokehold on another officer, and grabs his gun.

Here's Joe Biden saying cops should just shoot charging attackers in the leg to stop them without killing them.

The reality of what happens when someone charges a cop with a weapon. pic.twitter.com/1OknQRQSFU

Biden is Serious About This Solution

Believe it or not, this isn’t the first time Biden has suggested police officers be trained to shoot suspects in the leg.

He made the same contention during a meeting with African American community leaders at the Bethel AME Church in Wilmington, Delaware, this past June.

Joe Biden says he wants cops who have someone running at them with a knife to “shoot them in the leg.” pic.twitter.com/uhtj8gQa6l

Critics picked him apart at the time as well.

At the time, my friend Dana Loesch  said Biden “clearly has zero experience with firearms, firearm law, or self-defense — you don’t shoot unless lethal force is absolutely justified.”

Biden clearly has zero experience with firearms, firearm law, or self defense — you don’t shoot unless lethal force is absolutely justified. His “shoot to wound” rhetoric is irresponsible, not unlike when he told people to just fire shotguns from their balconies. https://t.co/qyZsv4XcIG

Rob Pincus, who has trained police officers throughout the United States and Europe, explained to the Washington Free Beacon why the ‘shoot them in the leg’ tactic is dangerous. “Legs move. It’s much harder to hit a smaller moving target than it is to hit the chest,” Pincus added, “From a technical shooting skill standpoint, from a technical legal standpoint, it’s not where we want to go at all.”

In that same response at Thursday’s ABC town hall, Biden also reiterated another proposal to have psychiatrists and/or psychologists accompany police officers on dangerous calls.

He’s made this suggestion before as well.

BIDEN: If a police officer “goes on a 911 call, it’s better if he or she has with them a psychologist or psychiatrist.”

So he wants dead psychiatrists and/or psychologists? Any call can be dangerous, even normal traffic stops.  When threatened with lethal force, a cop’s reaction must be instantaneous to protect himself and the community. There is no time for “how does it make you feel?” or “did your mother hate you?’

At the first presidential debate, President Trump was able to stump Biden when he asked him to name one law enforcement group supporting his campaign. Biden would later admit that he had “support from police my whole career up until this year.”

His ‘shoot them in the leg’ proposal is one of many reasons why law enforcement doesn’t take Biden seriously.