Did Biden Channel Richard III? Or Did Shakespeare Anticipate A Biden Presidency? 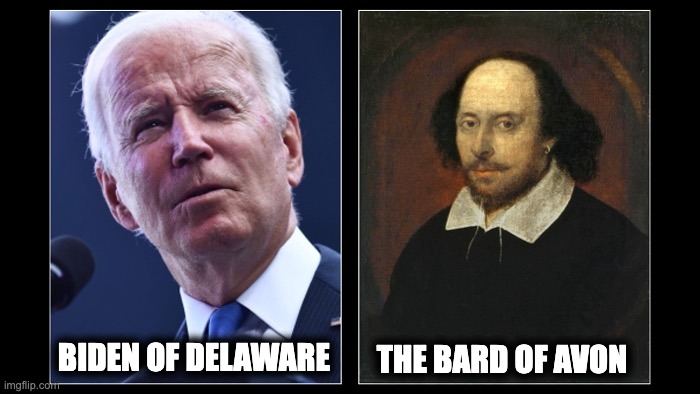 It was his latest attempt to scare America about COVID. On Thursday, President Joe Biden met with his coronavirus response team and took the time to warn unvaccinated people about the Omicron variant. Biden Richard III

“It’s here now and it’s spreading and it’s going to increase. For unvaccinated we are looking at a winter of severe illness and death if you’re unvaccinated for themselves, their families, and the hospitals they will soon overwhelm.”

“But, there’s good news, if you’re vaccinated and have your booster shot you’re protected from severe illness and death.”

While I agree with the President that everyone should get their pokes, I disagree that the government should force anyone to take the vaccine.

Either he has forgotten because of his apparent dementia or is lying because  Biden’s words contained a few untruths.  Firstly the Delta variant is the dominant one in America. While it is expanding fast, as of the week before Christmas, the CDC reports that 96% of cases are caused by Delta.

The first real-world analysis, based on 78,000 Omicron cases in South Africa, found that the strain causes less severe disease, with 29 percent fewer hospitalizations compared to the original Wuhan variant and 23 percent fewer than Delta, according to the Telegraph.

The findings of the study, conducted by South Africa’s largest private health insurer, Discovery Health, are preliminary and have not been peer-reviewed, but they do line up with other early data about Omicron’s behavior.

Studies in Hong Kong and Great Britain have come up with similar conclusions. All these studies are going through the peer review process. Therefore the results are not final.

So why is the President predicting that Omnicrom a winter of severe illness and death, and why does his choice of words sound like I’ve heard it before? Wait! I know, Biden must have based his speech on one of Shakespeare’s most famous monologs. Either that or the Bard of Avon could foresee the future.

Was Shakespeare a seer predicting the winter of 2022 per Joe Biden? There are many similarities.

In the monolog, Richard III was celebrating his brother King Edward IV gaining the crown in a civil war. Hopefully, Biden’s policies will not create a civil war, but based on polls, it will produce a change in congressional leadership next year and possibly a change in the presidency in 2024;

Just as Biden doesn’t care what the American people want, demonstrated by his mandates, the Build Back Better plan, the border crisis he created, and inflation, Richard looked forward to the people objecting to his actions, “And hate the idle pleasures of these days.” Because of his actions, Richard becomes paranoid and unpopular.  Beginning with leaving  Americans behind in Afghanistan, the POTUS’ popularity crashed, And he always blames others for his mistakes. Top that with the fact that he claimes the Republicans were after him.

So the question remains, did Shakespeare anticipate Joe Biden, or is the President trying to channel Shakespeare?  Below is a video of Laurence Olivier, arguably the most excellent actor of the 20th century, performing the famous monolog to help you decide.