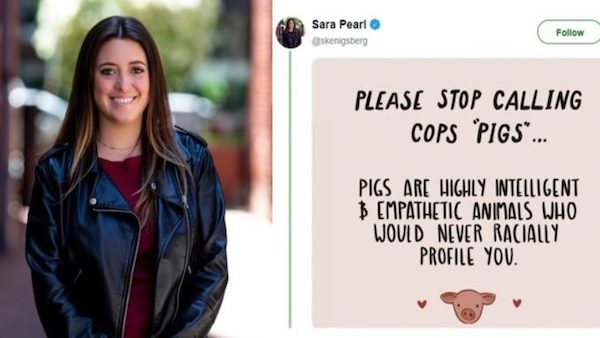 A supervising producer for Joe Biden’s presidential campaign shared a meme last month that suggested police officers shouldn’t be called ‘pigs’ because, unlike them, the animals are “highly intelligent and empathetic animals who would never racially profile you.”

Sara Pearl Kenigsberg posted the meme on Twitter and later retweeted a user’s comment that echoed the same sentiment, but added police officers are “monsters.”

Further analysis of her feed shows a “Defund Police” hashtag, a note that the Buffalo police department should be “defunded immediately,” and criticism toward the NRA for sending condolences to officers in Dallas who were the victims of a sniper who wanted to kill “white people” in 2016.

Kenigsberg’s LinkedIn profile indicates she is a Supervising Producer at Biden for President, previously serving on the campaign for Bernie Sanders.

She has since deleted the tweets after they were discovered.

Biden campaign staffer mocked cops as worse than 'pigs,' called for defunding police. The videographer, Sara Pearl, also retweeted a user's comment that while "pigs are sweet, intelligent and compassionate," police officers are "monsters" who "don't deserve to be called pigs." pic.twitter.com/llF9DH3NC0

Fox News reached out to the Biden campaign, who acknowledged receipt of the request for comment but refused to actually provide one, something that surprised the Trump campaign.

“Biden employs a staffer who uses the vilest, inflammatory, and incendiary language to target the brave men and women who risk their own lives to keep us safe,” the campaign said in a statement.

Richard Grenell, the former Director of National Intelligence, chimed in as well.

Seems like a straightforward question, and yet Biden and his staff couldn’t answer it.

Well, it is the same Joe Biden who declared that some police funding should be taken away and moved to other areas.

Joe Biden can’t stand up to his supporters or staff who are calling to Defund the Police. Scary!

The Biden campaign didn’t respond to when given the chance.

Why wouldn’t the Biden campaign immediately say “of course we don’t support this!”??!https://t.co/BNP2BYO54G

Is there any more symbolic indication of Biden turning far-left than a former Bernie staffer who thinks police officers are worse than pigs producing videos for his campaign?

Biden, after all, in an interview earlier this month, said, “yes, absolutely,” he will divert funds from police because some have “become the enemy.”

He went so far as to suggest some law enforcement are “the enemy.”

“Surplus military equipment for law enforcement, they don’t need that!” Biden exclaimed. “The last thing you need is an up-armored Humvee coming into a neighborhood, it’s like the military invading.”

“They don’t know anybody. They become the enemy,” he continued. “They’re supposed to be protecting these people.”

99 percent of the men and women walking the thin blue lone are protecting the people, but a major party nominee running to be the next president wants to punish them because of a few bad people.

Cross-Posted with the Mental Recession.