Who Is Paying For The T-Shirts? 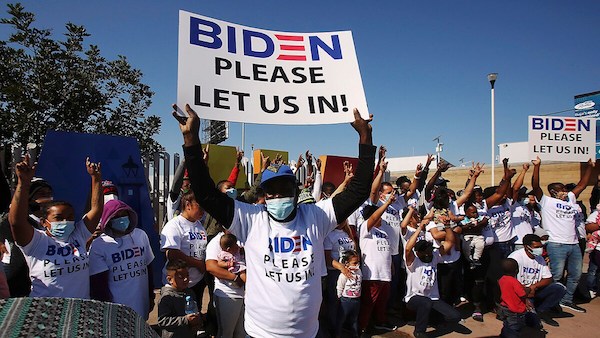 When Joe Biden was running for office, he committed to being soft on illegal immigrants. Message received. A large group of illegal immigrants from Central America was photographed at the San Ysidro crossing port in Tijuana on Tuesday. Many of them were wearing brand new white t-shirts that read, “Biden, Please Let Us In!”

Who is paying for shirts? It had to be pre-planned and given out by a supporter of illegal immigration,

Who is funding this?

Clearly, someone is providing these shirts to migrants, unless they’re the ones ordering them from TeeChip and waiting the 5-10 days for delivery, which seems unlikely.

Any rational person could deduce that the recent surge in illegal border-crossers is due to President Joe Biden rolling out the welcome mat during his campaign by saying that he would reverse the Trump administration policies on deportations, stop the “remain in Mexico” policy, and resume the Obama-era standard of “catch and release.”

The administration is also being cagey about the Biden administration’s plans with regard to the Title 42 public health restrictions invoked by the Trump administration to prevent COVID-19 from spreading. The emergency measure allows rapid expulsion of migrants from the United States, often within minutes and without the need for detention.

In March 2020, former President Trump imposed a CDC order known as Title 42 that allows federal immigration officials to quickly return border crossers to their native countries to prevent adding to the current public health emergency in the U.S.

CBP and DHS do not do COVID screening, and it turns out that (shocker) over a hundred people who have crossed from Mexico into Texas illegally have tested positive for the virus and are on their way to spread it to various parts of the country. Migrants are not required to quarantine.

Back in 2019, former DHS Secretary Jeh Johnson said that more than 1,000 apprehensions a day at the border would “overwhelm the system.”

Will Democrats in Congress continue to ignore the invasion? pic.twitter.com/OvdDvGrGme

There seems to be an actual crisis at the border, but the Biden administration refuses to call it that, instead opting for the term “challenge”.

What does President Sleepy Joe have to say about the sudden rush for the border? Not much, actually. As he was being shepherded away by his handlers, you can hear President Biden mumble, “We can handle it.”

I’ve been to the southern border many times and I have witnessed the crisis firsthand. pic.twitter.com/vOCbqdMTa2

Democrats keep talking about “comprehensive immigration reform”, but what they really mean is “open borders” for illegal immigrants. They want to throw open the borders wide for certain immigrants — the illegal kind from Central America who share their left-wing political views — and turn a blind eye to the other problems with the slow, expensive immigration system where greasy immigration lawyers can fleece legal immigrants blind for years while promising them, “It’ll just take a few more months.”

Have you seen any proposals from Democrats that have anything to do with legal immigration? Point one out. I’ll wait but will not hold my breath.

The shirts were a bit of a tip-off — these are future Democrat voters. This is precisely why Democrats have no desire at all to deal with illegal immigration and push for amnesty.

Don’t let them get away with it. Legal immigration needs to be defended. The millions of people that do it the right way need your support. Speak out for them.