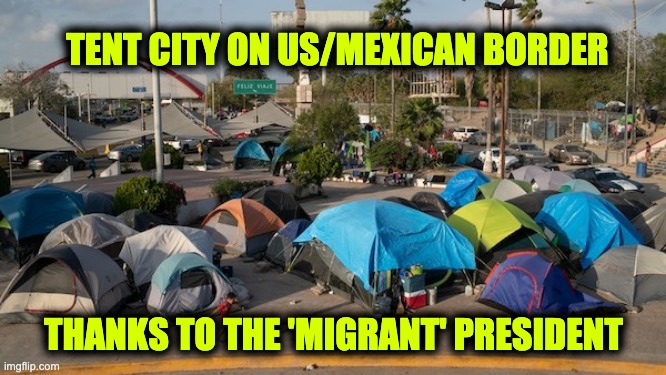 Reuters reports that Mexico’s government is worried that the Biden administration’s asylum policies increase illegal immigration and feed the Mexican organized crime cartels with a higher income from human smuggling, torturing victims, and stealing their money.  Biden the migrant president

Uh-oh, Joe! It looks like President Biden’s policies are being criticized by Mexico’s government, and the media has noticed! Well, knock me over with a feather! What a shock!

One massive story is the news that there is a current crisis at the southern border as illegal immigrants have been emboldened by President Biden’s easing up on former President Trump’s immigration policies.

They’re even heading up to the border wearing “Biden, Please Let Us In!” t-shirts. This is clearly an organized effort by the Biden leftists to bring people across the border, and the government of Mexico is not happy about the policy change.

Mexico’s government is worried the new U.S. administration’s asylum policies are stoking illegal immigration and creating business for organized crime, according to officials and internal assessments seen by Reuters.

Ever since President Joe Biden won the White House vowing to undo the hardline approach of his predecessor Donald Trump, Mexico has both looked forward to an end to migration burdens imposed by Trump, and braced for a new influx of people.

Detentions on the U.S border have surged since Biden took office on Jan. 20. Mexico has urged Washington to help stem the flow by providing development aid to Central America, from where most migrants come, driven by a humanitarian crisis…

…Previously unreported details in the internal assessments, based on testimonies and intelligence gathering, state that gangs are diversifying methods of smuggling and winning clients as they eye U.S. measures that will “incentivize migration.”

Oh, would you look at that! Gangs are looking to capitalize on the new porous border.

And migrants, who are trying to come in by (largely) making bogus asylum claims are heading en masse to the border because when Joe was running, he promised a 100-day moratorium on deportations.

“They see him as the migrant president, and so many feel they’re going to reach the United States,” Mexican President Andres Manuel Lopez Obrador said of Biden the morning after a virtual meeting with his U.S. counterpart on March 1. “We need to work together to regulate the flow because this business can’t be tackled from one day to the next.”

The “Migrant President,” eh? I suppose that is better than “dementia Joe.”

Well, who could’ve seen that migrant surge coming other than anyone who followed the news during the past year?

While in his basement doing his “virtual” campaign, Joe Biden said that he was going to stop deportations, stop building the wall, push for amnesty, and reinstate the same Obama policies that caused the “kids in cages” in the first place. But the partisan presstitutes cheerleading for Ol’ Joe assured us that this didn’t mean “open borders, that was a lie. But MSM won’t report that he lied because they are thinking “at least he’s not a Bad Orange Man that tweets mean things.”

The Mexican government is concerned that the following changes Biden has made to Trump-era policies are encouraging the surge in Illegal Aliens moving through Mexico toward the U.S. Border.

They’re applauding him for committing to not finishing the wall, however, which is… odd.

The open borders leftists, in their handwringing of the treatment of migrants by CBP, don’t seem to realize that migrants are treated as commodities by unscrupulous organized crime coyotes who just see them as an easy way to make a quick buck, and their fate isn’t important once they’ve been paid.

“Migrants have become a commodity,” the official said, arguing they were now as valuable as drugs for the gangs. “But if a packet of drugs is lost in the sea, it’s gone. If migrants are lost, it’s human beings we’re talking about.”…

…Mexican intelligence shows smugglers’ transit costs vary widely. One assessment said an unaccompanied Central American minor could secure passage to the U.S. border for about $3,250. By contrast, for African travelers, the rate was $20,000. Asians must also pay more.

One evaluation set out concerns there could be a significant influx in migrants from outside the region – the Caribbean, Asia, Africa and the Middle East – as coronavirus-led border restrictions begin easing.

It’s not just migrants from Central America — they’re from everywhere. They’re paying thousands of dollars to come in illegally because Biden makes it easier than going through the time-consuming and expensive legal process.

Let’s get this straight — advocates of Big Government want the government to intrude on what you can wear on your face, decide whether you can attend church and if family members that don’t live in the same house can hug, but they don’t want the government to know who is entering the country. These same people want to have you lose your social media accounts because they don’t like your tweets while also calling the enforcement of laws that currently exist “oppression” and discrimination against “brown people.” They give no thought to children being trafficked; 80% of Central American women and girls crossing the border illegally are raped, and making drug dealers rich for destroying lives in America.

Maybe, just maybe, the compassionate thing is to not encourage illegal immigration and instead beef up the security at the border while examining where problems exist within the legal immigration system because Lord knows there are some big problems there! Democrats don’t want to do that, though, because that’s what Trump did. Where is their compassion for these mistreated migrants? It takes third place to their hatred of Donald Trump and bringing in more Democratic Party voters—that is completely disgusting.