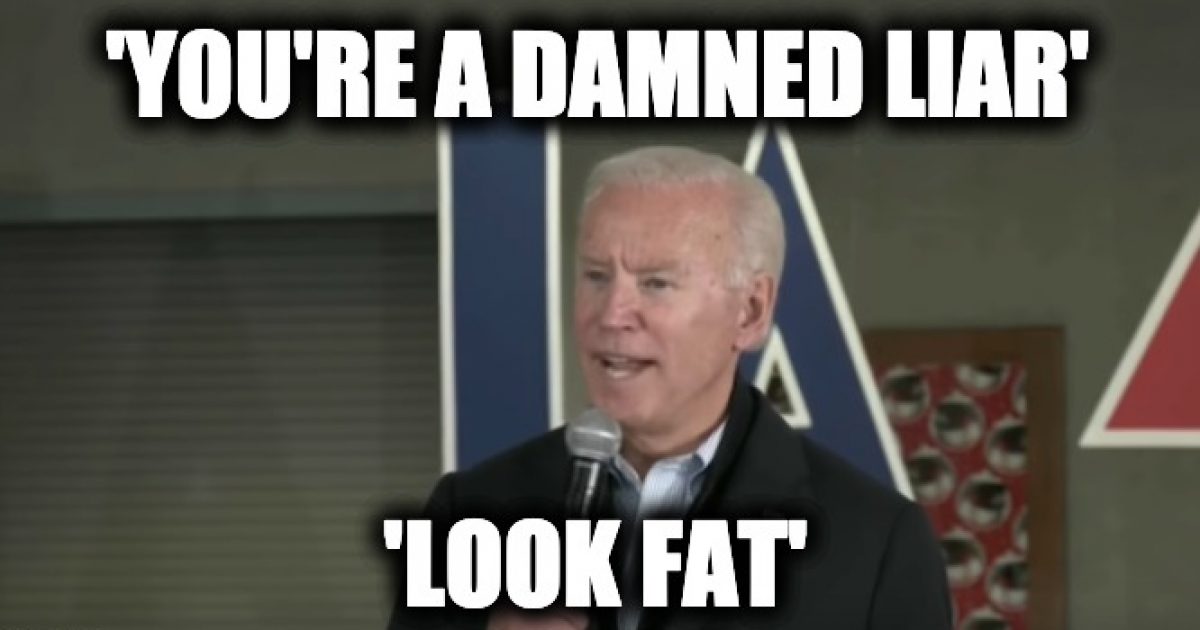 At an Iowa campaign stop, Democratic presidential hopeful Joe Biden exploded at a retired Iowa man named Merle Gorman calling him a damned liar. and fat while challenging him to a push-up contest. Biden was reacting to Gorman bringing up the scandal involving the former VP and his son Hunter. He accused Biden of getting Hunter a job with Burisma energy, a firm that wanted to get close to the President [Obama] and being too old to run for president Thursday. Gorman later spoke to the NY Post saying (among other things) that Biden “got a wet noodle for a backbone.” Biden Loses It.

“We all know Trump has been messing around in Ukraine over there, holding their foreign aid for them to come up saying they’re going to investigate you. We know all about that. He’s no backbone. We know that. But you, on the other hand, sent your son over there to get a job and work for a gas company that he had no experience for, absolutely nothing, in order to get access to the president. You’re selling access to the president just like he was.”

“You’re a damn liar, man. That’s not true. And no one has ever said that”

Tons of people said that. When George Kent testified to the Shifty Shiff hearings, he said that he raised concerns about Hunter Biden’s board seat on Burisma because he was Biden’s son, He was rebuffed and told that Vice President Biden didn’t have the “bandwidth.”

And Biden responded by challenging him to a push-up contest

At the 1:30 mark in the video below, Biden seems to begin calling Gorman a fat___, but before he said what kind of fat Gorman was, he caught himself and continued with, “here’s the deal.” His press secretary claimed he didn’t say fat, but his words were “look fact” when you watch the video at the end of this post, you decide.

After the heated exchange, Merle Gorman, who is a Marine Corps veteran and retired farmer, spoke to the NY Post.

“I’m positive 90% of the people there didn’t know about his son working on the board in Ukraine. I wanted it brought out there…If it educated them [Iowa voters] a little bit, so be it, I’m glad it happened.”

The exchange speaks for itself. He didn’t have the guts to explain the situation, and that’s what I wanted.

“He got pissed off and stomped around … he wasn’t happy at all,” Gorman continued. “He started mumbling, saying it wasn’t true.”

“After today, he told me what he’s made out of … he’s got a wet noodle for a backbone.”

Gorman told the Post he went to the event because it was taking place a couple of blocks from his home, and was spurred to ask about Hunter’s Ukraine dealings after hearing the other questions from the crowd.

“All the others were softballs questions, they might as well have been asking him what color the chandelier was in the vice president’s office

“I wish he had explained in a decent tone of voice why he got his son in that position over there and in my opinion, he had no business whatsoever sticking his nose over there.”

As for Biden’s push up challenge:

I got a friend in New Hampton who is 105 years old and he can do push-ups, so it doesn’t mean anything about how smart you are,”

After the exchange, Gorman said “quite a few people came up to shake my hand and said ‘right on man’ and others were mad.”

One mad guy got caught on camera:

"Stick it up your ass, fella."

Voter that challenged @JoeBiden gets into confrontation with another voter that told him to "get out of here."

Gorman usually votes for Democrats, he told the post he voted for Obama twice and now supports Warren.

Below is a video of the Biden-Gorman exchange: