If Biden And Congress Continue To Spend Like Drunken Sailors, The Economy Is Going Down The Abyss. 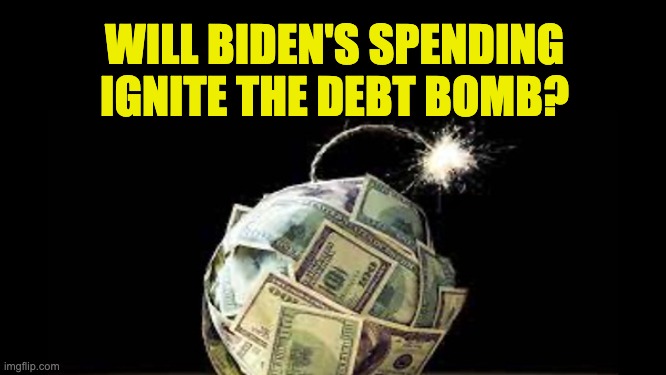 With his proposed ‘infrastructure” bill, Biden will be asking for a smorgasbord of far-left policies, which at the very least will reduce our freedoms and move America closer to socialism. . Additionally, the new $3 trillion in spending is going to move the American economy closer to collapse. Today the national debt is at $28.1 trillion. Adding $4.9 trillion (the infrastructure bill along with the recently passed COVID bill) will increase that debt to $33 trillion, not including the rest of federal government deficit spending and unfunded liabilities such as Social Security and Medicare.Biden igniting the debt bomb

Is Biden pushing this new bill as an attempt to implement additional socialist policies, or is he trying to ignite the “debt bomb,” or both? A debt bomb happens when debt becomes so large it cannot be sustained, investors stop buying treasury notes,  and the economy collapses. The Biden Administration may be loaded with socialists, but they aren’t idiots. They must know that all their spending may lead to a collapsed economy. Perhaps they believe a debt bomb will make it easier to implement socialism.

The only reason we don’t have a debt crisis right now is a combination of the Federal Reserve via quantitative easing — and other financial institutions and central banks globally that still buying treasuries.

After months of internal debate, Mr. Biden’s advisers are expected to present the spending proposal to the president and congressional leaders this week, as well as begin outreach to industry and labor groups. On Monday, Mr. Biden’s national climate adviser, Gina McCarthy, discussed his infrastructure plans — and their role in combating climate change — in a meeting with oil and gas industry executives.

Administration officials caution that details remain in flux. But the enormous scope of the proposal highlights the aggressive approach the Biden administration wants to take as it tries to harness the power of the federal government to make the economy more equitable, address climate change, and improve American manufacturing and high-technology industries in an escalating battle with China.

The bill itself is estimated to ask for about $3 trillion in new spending, which itself is more than 30% more than the administration was able to muster for COVID-19 relief. The Republicans are objecting, but that didn’t help with the $1.9 trillion COVID Pork-A-Rama recently passed.

On Monday, Senate Minority Leader Mitch McConnell (R., Ky.), said the proposal “may actually be a Trojan horse for massive tax hikes and other job-killing left-wing policies.” Mr. McConnell said the administration’s proposal was likely to be similar to the highway bill that was passed last year by Democrats in the House of Representatives.

“It would have plowed unbelievable sums of money not into the kinds of big practical projects that Americans even think of as ‘infrastructure,’ but into their obsessive focus on climate policies to the exclusion of everything else,” Mr. McConnell said.

Even before the $1.9 trillion bill, economists were asking whether the economy can keep up with the growth of the debt. If it did, then things might seem okay. Normal inflation would make even a $100 trillion debt seem small because the economy was growing robustly. But the economy has been growing slowly for the past two decades—it has not grown above 4 percent for en entire year since 2000, and not above 3 percent since 2005.

The day of reckoning is coming. The debt bomb will go off. Will it 10 years from now, 20 years, or more? Federal Spending during the past twelve months moved the collapse date earlier. Honestly, it’s not just Biden, Bush #43 doubled the national debt, Obama grew it by 75%, and Trump by a third (in half the time).

In the end, it doesn’t matter because if Biden and Congress continue to spend like drunken sailors, the American economy is going down the abyss.