Kicking The Surge Down The Road? 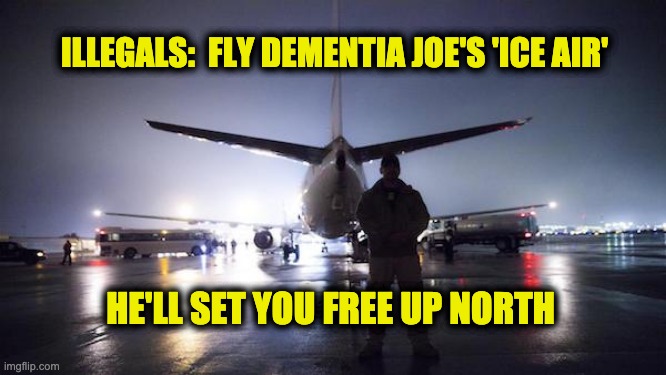 When Joe Biden assumed President’s role, many on the right side of the aisle feared the worse as far as the immigration situation in this country is concerned.  Where Donald Trump had pushed for the nation to remain vigilant in enforcing the immigration policies that we already had on the books, there were worries that a Democratic President, backed by a Democratic majority, would simply undo all the progress made under the previous administration. Biden fly illegals north.

Some of those fears appear to be coming to fruition, as the migrant surge at the southern border has become so intense that Border Patrol is now considering flying these people illegally sneaking into the United States to the Canadian border for processing.

U.S. Customs and Border Protection officials have requested airplanes to fly migrants to the U.S.-Canadian border for processing amid a surge in illegal crossings at the southern border, the Washington Post reported on Friday.

Border officials asked CBP to make the request to U.S. Immigration and Customs Enforcement (ICE) after 1,000 migrants, including unaccompanied minors, crossed the Rio Grande into South Texas on Friday morning, while another 1,000 who crossed on Thursday night were still waiting to be processed, according to an email reviewed by the Post.

The agency has not determined which northern states would receive the migrants. Two Department of Homeland Security officials confirmed that the action was under consideration.

Recieve is the correct term, as the illegals caught on our southern border are being released into the country.

“President Biden’s proposal to fly illegal immigrants to the northern border states for processing is dangerous and would put the safety of our North Country community and our border law enforcement officers at risk,” Stefanik wrote in a statement Friday.

“This proposal is especially outrageous and untenable at a time when American citizens cannot even cross the northern border to visit their family or access their own property.

Some lawmakers have suggested that the surge in border crossing has occurred on account of a general feeling that Joe Biden would be a more favorable President for illegal immigration overall. And he has been; stopping the completion of the fence, leaving gaping holes where trespassers can sneak into the country, stopping the “stay in Mexico” program, reinstating catch and release, directing border agent to release illegals into the country (without testing for COVID), Biden’s public proclamations he’s going to grant amnesty–all of that and much more.  Even as he told people not to come earlier this week, his full message was don’t yome’—Yet. “We’re In The Process Of Getting Set Up.”

The surge of illegals trying to get into the country has gotten so bad that the CBP is overwhelmed in the south and will possibly send them to our northern border.  Nancy Pelosi says the Biden administration has the surge of Illegals overwhelming our border “under control.” I suppose that depends on one’s definition of control.