Biden Flips Out At Construction Worker: ‘You’re Full Of Sh*t,’ ‘A Horse’s A**’ 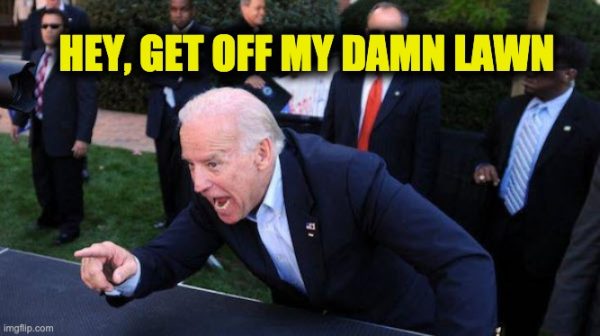 Former Vice President Joe Biden flipped out on Tuesday, as he engaged in an obscenity-laced argument with a Second Amendment supporting construction worker during a Michigan campaign stop.  The Democrat presidential hopeful told the man that he was “full of sh*t,” “a horse’s ass” and warned that he will slap him in the face.

WATCH: "You’re full of sh*t," @JoeBiden tells a man who accused him of "actively trying to end our Second Amendment right."

CBS posted a transcript of the argument:

You are actively trying to end our Second Amendment right and take away our guns,” the worker told Biden.

Biden replied: “You’re full of sh**.” “I support the Second Amendment. The Second Amendment — just like right now, if you yelled ‘fire,’ that’s not free speech,” Biden continued. “And from the very beginning — I have a shotgun, I have a 20-gauge, a 12-gauge. My sons hunt. Guess what? You’re not allowed to own any weapon. I’m not taking your gun away at all.”

After the worker told him that he had made the remark in “a viral video,” the former vice president replied that “it’s a viral video like the other ones they’re putting out that are simply a lie.”

“This is not OK, alright?” the man said, to which Biden replied, “Don’t tell me that, pal, or I’m going to go out and slap you in the face.”

“You’re working for me, man!” the worker said.

Biden can be heard insisting, “I support the Second Amendment…I have a shotgun, a 20-gauge, a 12-gauge, my sons hunt.”

This is not the first time Biden slammed people at a campaign stop. He exploded at a retired Iowa man named Merle Gorman calling him a damned liar, and fat while challenging him to a push-up contest. Another time he told a different Iowa voter to go vote for someone else. In South Carolina, he told Carlos Rojas to go vote for Trump, Campaigning in North Carolina in December Biden suggested that a climate activist vote for someone else. And in early February But flipped out at a prospective New Hampshire voter, calling her a “lying, dog-faced pony soldier,” whatever that means.

The Michigan argument occurred just a few hours before the former SCHMOTUS  traveled Columbus Ohio to meet with leaders of gun control organizations in Columbus, Ohio.