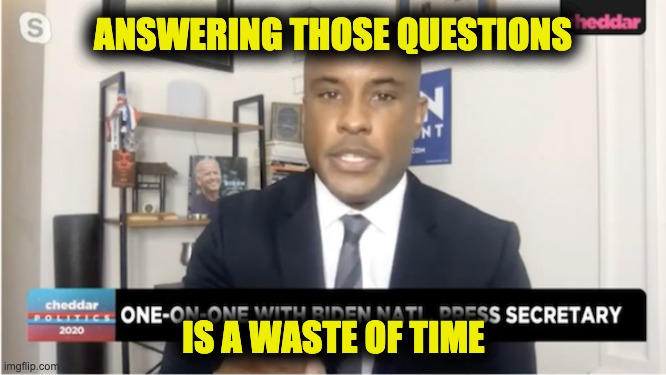 Why hasn’t Joe or anybody on his team come out to say that the Hunter Biden emails obtained by the New York Post are illegitimate? Biden’s Team won’t discuss the foreign influence scandal at all, claiming it’s a waste of time. Are they avoiding the question because the evidence is—-real? Sure looks that way.  Biden emails are legit

Here’s what’s up, via Daily Caller:

An email Hunter Biden received in April 2015 from a Burisma executive discussing an introduction to then-Vice President Joe Biden, which lies at the heart of a New York Post investigation, is unquestionably authentic, a cybersecurity expert told the Daily Caller News Foundation on Thursday

The DCNF obtained a full copy of Hunter Biden’s alleged laptop from former New York Mayor Rudy Giuliani on Wednesday. The DCNF provided Robert Graham, the founder of the cybersecurity firm Errata Security, with a copy of the email and its metadata for forensic analysis.

Graham, who has been cited as a cybersecurity expert in The Washington Post, the Associated Press, Wired, Engadget and other news and technology outlets, told the DCNF that he used a cryptographic signature found in the email’s metadata to validate that Vadym Pozharsky, an advisor to Burisma’s board of directors, emailed Hunter Biden on April 17, 2015.

In the email, Pozharsky thanked Hunter Biden for “inviting me to DC and giving an opportunity to meet your father and spent [sic] some time together.”

Lest we forget, Joe claims he has “never discussed” any foreign business with Hunter. Mmhmm.

But Chedder News’ reporter J.D. Durkin interviewed Biden campaign press secretary Jamal Brown on Thursday and asked him about the Biden family scandal twice. Brown refused to give an answer because being honest with the American people is a waste of time:

Rather than answer the question, Brown’s nonanswer was that talking about the smear was a waste of time. Mr. Brown,  If Biden did nothing, say it. If he didn’t have the two meetings with Tony Bobulinski, say it!  Being honest with the American people is never a waste of time.

The Biden campaign’s decision not to confirm or deny the charges their candidate may have made have been corrupted with underhanded deals with foreign countries, including one of America’s most existential threats China, shows that their candidate has no respect for the American people.  It’s also an indication that the stories are true. Because if false, Team Bided would be vehemently denying them.

Parts of this post was first seen a Flag & Cross