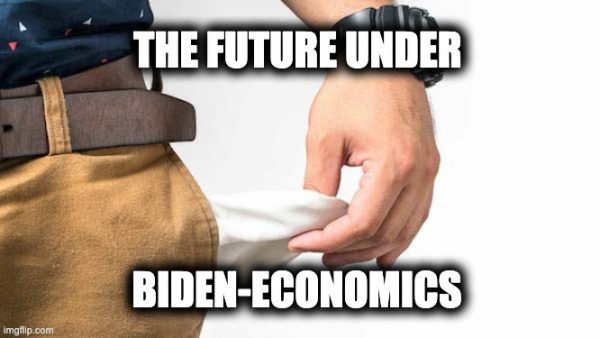 According to a Hover institute Study analyzed by the Wall Street Journal, the Biden economic plan will result in the median annual American household income to drop by $6,500. The Hoover study examines  Biden’s proposals on health insurance, taxes, energy, and regulation.  Biden economics

Overall, the authors estimate that the Biden agenda, if fully implemented, would reduce full-time equivalent employment per person by about 3%, the capital stock per person by some 15%, and real GDP per capita by more than 8%. Compared to Congressional Budget Office estimates for these variables in 2030, this means there would be 4.9 million fewer working Americans, $2.6 trillion less in GDP, and $6,500 less in median household income.

Or, to put it more directly–we will be screwed.

The study explains many factors behind income reductions. A big part of it is the taxes and regulations that will disincentivize hiring. The opposite of what Trump did to get the economy going.

Mr. Biden is also proposing substantial increases in business tax rates that will raise the cost of capital. The former Vice President likes to say he’d only raise the top corporate tax rate to 28% from 21%. But so-called pass-through entities (often small businesses) employ more than 40 million Americans, and most pay taxes at the individual tax rate.

“Biden’s plan to raise personal income and payroll tax rates would push their federal rates from below 40 percent to, often, above 50 percent, and these are on top of state income taxes,” the authors write.

Mr. Biden would also raise capital costs by phasing down bonus depreciation in the 2017 tax reform, and he’d raise labor costs by imposing the 12.4% Social Security payroll tax to income above $400,000. The $400,000 threshold isn’t indexed for inflation so it would apply to ever-more Americans as the years go by.

Biden learned how to prevent a full booming economy from Barack Obama.  The bottom line is that if you want a growth economy, vote for Trump.