Is Biden Coming For Your Guns? To Quote Beto, ‘Hell Yes’ — It’s Right There On His Website 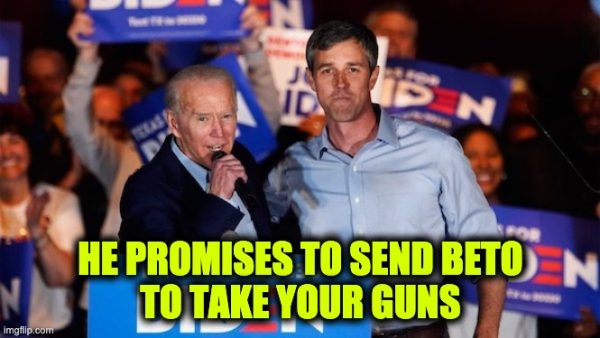 All the focus has been on Biden’s mask use, ridiculous rhetoric, personal attacks on Trump, and various Bidenisms. What we should REALLY Be looking at is his platform. Biden coming for your guns

He can duck and weave in debates and townhalls all he wants, but his platform is there for all to read.

Mark Levin calls it their Manifesto. We have referenced that previously.

He picked as his running mate the furthest left Senator of the bunch, whose record is literally further left than Bernie Sanders. But we’re all supposed to blindly accept that Joe is a ‘moderate.’

He was part of legislation pushing a gun ban before, and it should surprise nobody that the guy who pledged to put Beto ‘Hell Yes, we’ll take your AR-15s” O’Rourke in charge of gun policy is pushing gun confiscation.

Of course, the kind of legislation he is pushing does nothing to target the places where gun crime is a real problem… places like the mean streets of Chicago, for instance.

That doesn’t stop him from demagoguing the issue. From his website:

It’s within our grasp to end our gun violence epidemic and respect the Second Amendment, which is limited. As president, Biden will pursue constitutional, common-sense gun safety policies. Biden will:

Hold gun manufacturers accountable. In 2005, then-Senator Biden voted against the Protection of Lawful Commerce in Arms Act, but gun manufacturers successfully lobbied Congress to secure its passage. This law protects these manufacturers from being held civilly liable for their products – a protection granted to no other industry. Biden will prioritize repealing this protection.

Get weapons of war off our streets. The bans on assault weapons and high-capacity magazines that Biden, along with Senator Feinstein, secured in 1994 reduced the lethality of mass shootings. But, in order to secure the passage of the bans, they had to agree to a 10-year sunset provision and when the time came, the Bush Administration failed to extend them. As president, Biden will:

We notice it doesn’t say what will happen to someone who says that they do NOT want to participate in a government buyback.

Will the party that has spent this past year making such a big deal about dangerous armed standoffs between police and citizens create a dangerous situation where police will try to disarm citizens by force — when the Second Amendment specifically preserves their right to bear arms?

Which is it? Cops are neighborly and can be trusted, even when they are coming to take away your Second-Amendment rights? Or are they the personification of Evil as so many Biden/Harris voters seem to genuinely believe?

Biden coming for your guns

Biden coming for your guns