Are Pigs Flying? Is It Snowing In Hell? 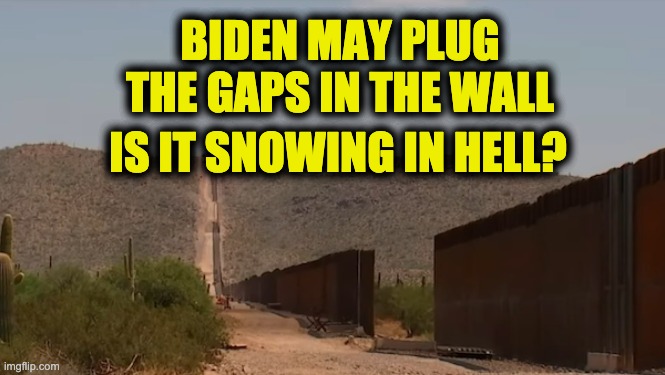 Look out your window—do you see pigs flying? Is it snowing in hell?  Did Biden finally realize that he caused the illegal immigrant crisis at America’s border with Mexico?  Because according to DHS Secretary Alejandro Mayorkas, the Biden administration is considering resuming the construction of Trump’s southern border wall.  At least to plug the holes left by stopping the construction and adding the technology in places where has not been added to the wall. close gaps border wall

Maybe the southern border situation isn’t as complicated as team Biden is making it seem. They claim their plan is to fix the “root causes” of illegal immigration — solving the problems of crime, poverty, and simply wanting to live in the Land of Opportunity. Illegal Immigration was down to a trickle a few months ago before Lyin Joe Biden took over. So it seems to any fair observer that the root causes of the surge at the border are the fact that Biden invited the Illegals and he ended the Trump programs that secured the border. Along with stopping the wall construction, he ended the “stay in Mexico” to apply for asylum program, reinstating catch and release, and stopping deportations, among others.

On Inauguration day, freshly-minted President Joe Biden signed an executive order to “pause” construction on the border wall because it’s racist or “not who we are” or something his leftist handlers told him to do.

Last month, Politico reported that the Biden administration was under investigation by the Government Accountability Office for halting millions of dollars in payments to companies that had been contracted to construct the border wall. So, “who we are,” according to the Biden administration, are people who shirk responsibility and fail to pay their debts. Good to know.

It turns out that they might be resuming construction on the wall anyway. It’s not exactly clear what triggered the sudden about-face — was it because of the surge at the southern border, criticism from the President of Mexico, or simply that the very expensive halt is now over? We may never really know. Lord knows the Biden administration isn’t going to be transparent about that sort of thing (or much of anything else).

The Washington Times got the scoop here:

Department of Homeland Security Secretary Alejandro Mayorkas told department employees he may restart border wall construction to plug what he called “gaps” in the current barrier.

In a conversation with Immigration and Customs Enforcement employees last week Mr. Mayorkas was asked about his plans for the wall and he said that while President Biden has canceled the border emergency and halted Pentagon money flowing to the wall, “that leaves room to make decisions” on finishing some “gaps in the wall.”

Mr. Mayorkas, according to notes of the ICE session reviewed by The Washington Times, said Customs and Border Protection, which oversees the wall, has submitted a plan for what it wants to see happen moving forward.

According to the ICE notes given to the Washington Times, DHS Secretary Mayorks said, “It’s not a single answer to a single question. There are different projects that the chief of the Border Patrol has presented, and the acting commissioner of CBP presented to me.” He added, “The president has communicated quite clearly his decision that the emergency that triggered the devotion of DOD funds to the construction of the border wall is ended. But that leaves room to make decisions as the administration, as part of the administration, in particular areas of the wall that need renovation, particular projects that need to be finished.”

DHS Secretary Mayorkas said that the “particular projects” included “gaps,” “gates,” and areas “where the wall has been completed, but the technology has not been implemented.”

Oh, so the last few months with record-breaking numbers of illegal immigrants pouring into the country could have been prevented if Sleepy Joe had just allowed the border wall to continue? It wouldn’t have prevented all of the Biden Fans from the Northern Triangle countries that illegally crossed the border wearing their fangirl Biden t-shirts, but it sure would have stemmed the tide a bit.

The Biden-Harris administration is an absolute disgrace.