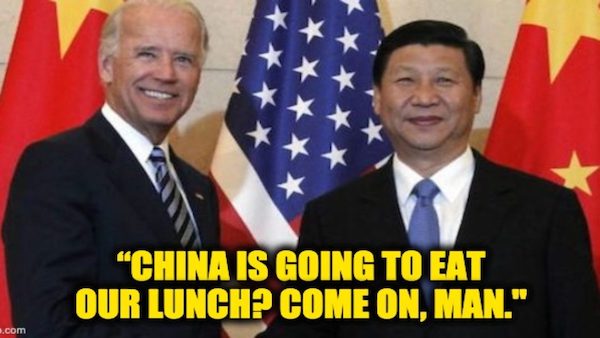 But we’re stuck here in the harsh light of day where we face the realization that the Democrat-aligned ‘Media(D)’ will bend over backward to shield any Dem ally from even the slightest scrutiny. Especially if it involves their very generous and influential friends from China.

Biden has already put forward a few Cabinet picks with warm relations or favorable views toward the one hostile nation that could pose a serious economic, political, or military threat. China has been open about its desires to overtake America and project international dominance and doesn’t care about ‘playing fair’ to accomplish those goals.

William J. Burns, who is President Joe Biden’s nominee for director of the CIA, is president of a think tank that has received up to $2 million from a Chinese businessman as well as from a think tank with close ties to the Chinese Communist Party.

As president of the Carnegie Endowment for International Peace, Burns also invited nearly a dozen congressional staffers to attend a junket to China, where they met with a communist party operative and a president of a Chinese front group.

…During Burns’ tenure at Carnegie, a businessman named Zhang Yichen joined the think tank’s board of trustees.

…Zhang is a member of two organizations linked to the Chinese Communist Party, according to his biography at CITIC Capital: the Chinese People’s Political Consultative Conference (CPPCC) and the Center for China and Globalization.

CPPCC is an advisory group for the Chinese Communist Party that is affiliated with China’s united front system, which promotes Chinese government initiatives abroad.

It is described on the website of one Chinese embassy as “a united front organization under the leadership of the Communist Party of China and an organ for various other political parties, mass organizations and personages of various social circles to take part in the running of the state.” — DailyCaller

Fortunately, Biden hasn’t been dogged by any accusations of improper relationships between himself and his inner circle and the Communist Chinese… right?

Oh, that’s right. It was reported, but the Media(D) and Big Tech worked together to silence those stories in the run-up to the election. Can’t possibly imagine why that might have been.

Do we really need to scrutinize this position? After all, how sensitive of a job could ‘CIA director’ POSSIBLY be?

If Joe was claiming to take a strong stand against international tyrants, he would need to throw out his old strategy and start fresh. He could start by recalibrating his benchmarks, including what ‘strong’ looks like.