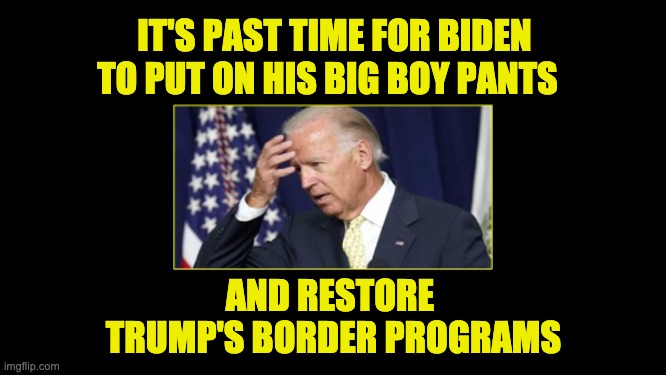 Remember when a million dollars of government spending was considered a lot? How about a billion. Joe Biden is pumping $60 million tax dollars a week into housing the children of illegal aliens surging across the border as the number of these waifs soars to the highest level in American history. That level is expected to skyrocket further unless President Biden puts on his big boy pants, admits his mistake, and restore President Trump’s border policies.

According to the Customs and Border Patrol, 172,000 illegal immigrants have surged across the border in March, smashing all records. The number exceeds the previous record of 171,000 that surged across the border in February. The latest numbers for March go far beyond any of the monthly numbers of border encounters recorded by the Trump administration and are also the highest numbers seen in 15 years.

The number of unaccompanied migrant children has also exploded and increased in March to 18,890 children, an increase of 100% over February.

The Border Patrol encountered 18,663 unaccompanied children in March, well above previous highs of 11,475 in May 2019 and 10,620 in June 2014. The agency started publishing the numbers in 2009. Before then, adults made up the vast majority of those crossing the border.

March’s count was roughly double the number of unaccompanied children encountered by the Border Patrol in February and more than five times the number in March 2020.

CBP March numbers are officially out. The agency encountered a record number of unaccompanied children at the border (18,890).

Of the migrants expelled, 28% tried to cross again, according to officials. pic.twitter.com/eLllqsUmJD

Meanwhile, Biden is throwing up to $60 million a week at the illegal children that he invited and were caught at the border.

The Biden administration is spending at least $60 million per week to house the more than 16,000 migrant minors in its care, according to a report.

That funding, which amounts to $3.1 billion per year, is used to care for children in facilities run by the Department of Health and Human Services (HHS) after they’ve been transferred from Border Patrol. Those costs are expected to rise dramatically over the coming months, according to a Washington Post analysis.

That’s our tax dollars. And it’s all the fault of Joe Biden.

The Trump actions that Biden canceled during his first hours in office shut down illegal immigration and human trafficking to a trickle. But Biden and his team of leftists didn’t care.  Biden’s policy of opening the borders and inviting illegal aliens to “come on in”  is anything but humane. Biden’s policies are a major cause of the rapes, torture, and deaths of unaccompanied minors and adults trying to sneak across the border with the help of organized crime cartels.

All the above is on top of the $3.1 Billion of our tax dollars spent because Dementia Joe screwed up Trump’s successful border policies.