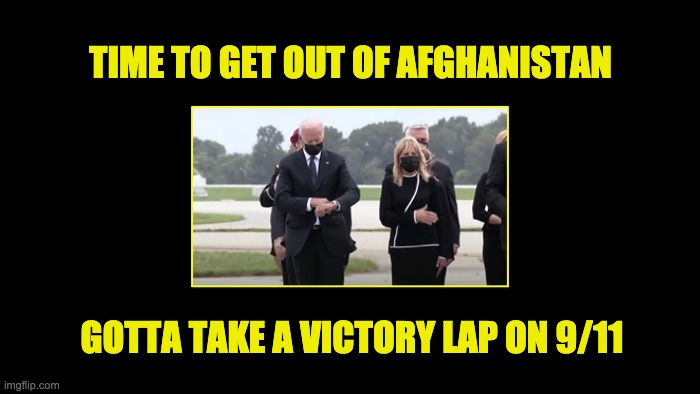 To quote Joe Biden himself, “this is a big f**cking deal.” It is undeniable that he totally blew the Afghan evacuation. Still, to add salt to the wound, he doesn’t understand the mistake. To him, it wasn’t a mistake. Biden accomplished his mission which in his mind was to allow him to stand up on the twentieth anniversary of the 9/11 attacks and say he got the U.S. out of Afghanistan.  Biden blew Afghanistan

When Biden makes his speech about the withdrawal (during the afternoon instead of Primetime when more Americans will see it), he will continue to make the case that U.S. troops had to leave Afghanistan–still ignoring that leaving Afghanistan is not the issue. America’s problem with the debacle in Afghanistan is not that our troops left but how the withdrawal was executed. And once Biden set an artificial date for the end of the operation, our military was forced to leave without getting out all Americans and all the  Afghans who risked their lives to help the American war effort.

Biden blew the withdrawal because it was not treated as a military operation. It was a political operation dressed in military fatigues. Joe Biden wanted the U.S. out of Afghanistan before the 20th anniversary of September 11. He wanted to have the photo op on 9/11/21 and say he ended America’s longest war. That goal took priority over everything else, including executing the evacuation correctly.

Normally a country would get its citizens and equipment out first, and then the military personnel, but Biden did it “ass-backward” and the evacuation collapsed.

The collapse of the U.S. evacuation effort began on July 2nd when our military was ordered to abandon Bagram Air Base.  Bagram was the primary base for American troops in Afghanistan and Biden wanted to show America he was really getting us out.  But the move made to prove a political point ignored the fact that Bagram was an airport that would have allowed for a safer and easier evacuation of Americans and allies. Bagram is an airport outside of a major city (40 miles from Kabul), making it easier for people to get there as an exit point, and it has two runways twice that of the one used in Kabul.

We simply bugged out of Bagram. Basically, we just turned off lights and slipped away in the middle of the night. We didn’t tell the Afghan forces who were supposed to take the base over in advance. For all intents and purposes, while Biden was sending a political message home that he was serious about leaving Afghanistan, Biden was sending a message to the Afghans–America wasn’t just leaving, we were totally abandoning them. Our abandonment destroyed the morale of the Afghan military,  leading to the easy Taliban take over.

When the U.S. left Bagram, we abandoned billions of dollars worth of military equipment to the Taliban. For example, the Taliban terrorists now have a bigger supply of Blackhawk helicopters than many of our allies. Some of them are already being used,

Our Air Force!
At this time, the Islamic Emirate's air force helicopters are flying over Kandahar city and patrolling the city. pic.twitter.com/rlE6nUldZf

It is believed that the person at the end of the rope is one of America’s Afghan partners. But how can that be? The Biden Administration has told America that the Taliban has changed…they promised the Secretary of State they would not take revenge against the Afghan interpreters and others who helped the U.S. war effort.

The Taliban also promised  Sec. of State blinked that they would allow anyone who wanted to leave Afghanistan the freedom to leave. America was not told, however, if the head of the Taliban pinky swore, or “crossed his heart hoped to die, stick a needle in his eye” promised.  That promise shouldn’t need to be followed through because we were told we would get everyone out before we left Afghanistan.

But we didn’t get everyone out, because the American forces needed to be gone from Afghanistan so Joe Biden could take his curtain call in less than two weeks–9/11.

Biden’s national security team told America that we have leverage against the Taliban to make them follow through on their promise and to allow the hundreds of Americans, and thousands of Afghans who wish to leave a peaceful exit of the country. They stated that the terrorist Taliban wanted to become a respected member of the international community. It’s a Terrorist group that kills innocent men and women,  rapes little girls, and sells them into sexual slavery. A terrorist group like that doesn’t give a rat’s arse about the thoughts of the international community. The Taliban is already killing and torturing Afghans.

America has no leverage. Biden pulled our forces with a total disregard for the people left behind. What kind of leverage could we possibly have? The Taliban cannot be frightened of an America led by Joe Biden, he has already proven to be weak. Is Biden threatening to call their mommies to tell them the Taliban leaders they were misbehaving? It’s a question I asked the State Dept.

If they don’t meet their commitments is Pres. Biden going to call the Taliban’s mommies and ask them to send their naughty sons to bed without dinner and take away their video games?

We have no leverage! Biden and his team will continue to lie and spin until he’s had an opportunity to take a 9/11 victory lap.

Instead of becoming a true leader of the country, Joe Biden took leaving Afghanistan which is a military operation but put his political objectives first. He made America look weak to terrorists and our enemies such as China, Russia, North Korea, Iran, and others, raising the possibility of another attack on American territory taking the gamble that an attack won’t happen until he’s left office or totally lost his dementia-ridden mind.   Until then what will live in the heads of Americans is that Biden committed the ultimate sin for an American Commander-in-Chief–he left people behind to be tortured and killed by a terrorist organization, all because of politics—all because he wanted to have a winning moment on the 20th anniversary of 9/11. He should be ashamed of himself, but he has already proven he has no shame.