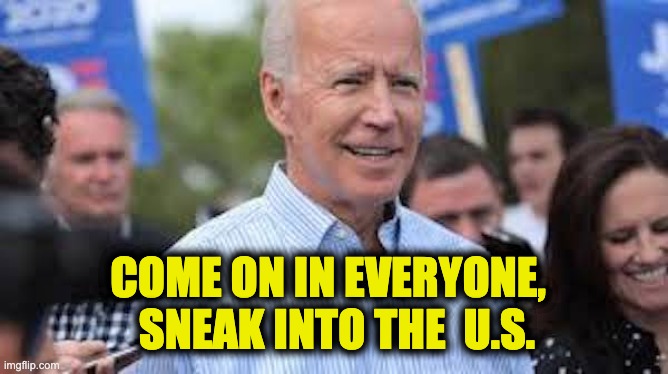 Under Democratic Party administrations, the tyranny of political correctness takes over our culture, our language, and political dialog. President Joe Biden is continuing in that tradition. He has initiated a new directive that would prohibit using the terms “alien” or “illegal alien” in official immigration communications. Biden bans illegal alien.

Let’s look at the dictionary:

Illegal: contrary to or forbidden by official rules, regulations, etc.:

Immigrant: a person who migrates to another country, usually for permanent residence

Despite the term’s correctness, the preferred term going forward for illegal immigrants will be “non-citizens” or other “inclusive” terms. If they really want to get rid of illegal alien, aren’t there other teams they need to change?

If I steal a car and the cops come to my house and ask me to show the papers proving I own the car and I can’t, shouldn’t they say I am illegal or undocumented? If I kidnap a child and I am asked to prove via a birth certificate whether the kid is mine or not, aren’t I an undocumented parent? If someone breaks into my house, are they an undocumented resident, or are they criminally trespassing?

My suggestion for a substitute illegal alien term would be criminally trespassing aliens, but that would probably make Biden’s leftist handlers have a stroke.

Axios reports, “Other changes include using ‘undocumented noncitizen’ or ‘undocumented individual’ rather than ‘illegal alien’ and ‘integration of civic integration’ instead of ‘assimilation.’”

NEW: DHS officials have been directed to strike words such as “alien” and “illegal alien” from communications with the public when referring to people who aren’t US citizens in an effort by the Biden administration to recast immigration terminology.https://t.co/c3jvBhHZYy

Axios is quick to note that Biden’s watered-down terminology is reflective of his “more welcoming immigration stance overall.”

They add that “the Trump administration referred to unauthorized immigrants as ‘illegal aliens’ and described border crossings as an ‘invasion.’” Those are accurate terms, but accuracy is apparently frowned upon in the media.

The term “alien” is actually the legal definition as defined by the Immigration and Nationality Act enacted in 1952.

It is used throughout and is defined as a term that “means any person, not a citizen or national of the United States.”

In 2010, the Obama administration, in which Joe Biden served as Vice President, openly bragged of having “deported a record number of illegal aliens convicted of criminal offenses.”

The term was used throughout the Obama-Biden years and can be seen on archived White House web pages.

“Biden decides he’s going to open our borders, and every one of our lives are in jeopardy.”

An #AngelMom whose son was killed by an #IllegalAlien said the Biden administration’s #Border policies are “absolutely” going to create more “angel families.” https://t.co/YwcdYEppmX

CNN reports that Biden and the Democrats are planning to “unveil legislation this week that seeks to provide a pathway to citizenship to the 11 million undocumented immigrants living in the United States.”

Joe Biden says that a pathway to citizenship for 11 million undocumented immigrants would be essential in any immigration bill pic.twitter.com/VHkF0SVmQv

How about a pathway to the country they came from instead of the one they snuck into?

Biden was promising amnesty for DREAMers as a candidate for President.

During a debate with former President Donald Trump, Biden vowed to provide “a pathway to citizenship for over 11 million undocumented people in America” because “we owe them.”

“We made a mistake. It took too long to get it right,” Biden says when asked why voters should trust him to deliver on immigration reform after the Obama administration presided over record deportations and failed to deliver on this promise. https://t.co/sfK5s5ZOTW #Debates2020 pic.twitter.com/MQEtGE0sQB

And the illegal aliens know it too.

Less than a month ago, a Honduran migrant traveling in a caravan of thousands to the United States said he was making the journey because Biden “is going to help all of us.”

Honduran migrant: President-elect Biden is "going to help all of us." pic.twitter.com/LkrVCsXcSb

Aside from his push for amnesty and his language welcoming illegal aliens, President Biden announced that he plans to engage his Department of Justice (DOJ) in a criminal investigation of the family separation program under the Trump administration.

Those were the same family separation tactics that were used under the Obama administration.