The Lid On The Schaftlein Report: Biden Hits A New Low 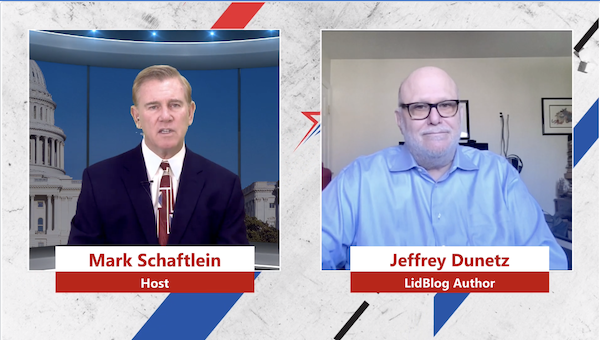 The Lid had the honor of being the guest of Mark Schaftlein on his program The Schaftlein Report. Mark and I had a great conversation, I revealed why it’s not a coincidence that it’s a big news day every time I am on his show, Kamala Harris’ fake French Accent, why Joe Biden’s poll numbers have fallen off a cliff (don’t blame me; I voted for the mean tweeter). and all the topics below. Biden approval hits a new low

1) Democratic Senators Whitehouse, Hirono, and Blumenthal call out the Biden Supreme Court Commission
*Why – they are not giving them what they want – The only ideas that they embrace is Term limits
*This does not fit the RADICAL Agenda for Court Packing favored by Democrats
2) Biden asks the FTC to examine if Oil and Gas companies are inflating gas prices – He is looking for a scapegoat while a Federal judge just granted an injunction on Biden’s Executive Order banning oil and gas drilling on federal lands
3) House awaits the CBO score on their $1.75T spending package that includes massive tax breaks for wealthy Americans in SALT repeal
4) Florida is a step closer to crippling vaccine mandates setting up a clash with the Biden Administration order
5) VP Harris makes a fool of herself claiming the border crisis is Trump’s fault in a blatant propaganda statement fiasco
6) She compounds her stupidity claiming to passing a giant spending bill will bring down inflation – She is utterly clueless
7) Biden handlers cancel press conference with leaders of Canada and Mexico – Keep him isolated as it appears he is incapable of handling the questions
8) Rittenhouse case day 3 with the jury
9) Colorado Representative Boebert lambastes Ilhan Omar

Make sure to watch Mark’s program every Monday-Thursday It’s posted at  8PM on the Schaftein Report website https://schaftleinreport.com/ or on the Shaftlein Report’s Facebook page, which can be found by clicking here. Watch the show below– I promise you will find the program entertaining, informative, and at times a bit snarky (it wouldn’t be me without some snark)

Along with the website and Facebook page, you can find the Schaftein Report at these podcast sites (logos are linked to the Shaftlein Report’s page on the podcast site)