Biden Does It Again-Makes Another Disparaging Statement About African Americans

Next Time Trump Should Tell Chris Wallace That He Denounces Biden 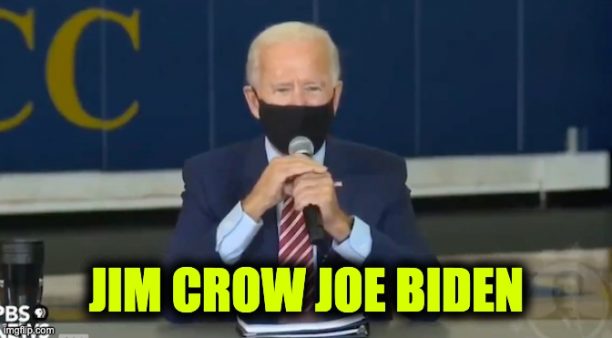 Campaigning in Tampa, Fla., the former SCHMOTUS Joe Biden made another comment that demonstrates what the Democratic nominee thinks of African Americans.

“The American public, the blinders have been taken off. They’ve all of a sudden seen a hell of a lot clearer. Geez, the reason I was able to stay sequestered in my home is because some black woman was able to stock the grocery shelf.”

“Geez, the reason I was able to stay sequestered in my home is because some black woman was able to stack the grocery shelf.” —Joe Bidenpic.twitter.com/c6Q2CAJCOy

Does that how he sees black women? Stocking grocery shelves. We know he believes if they don’t vote for him, they aren’t really black.

Joe Biden: "If you have a problem figuring out whether you're for me or Trump, then you ain't Black." pic.twitter.com/UvYZTjcPqZ

And that Black kids are poor (but they are just as bright and talented as white kids).

But when they grow up, those Black kids will all think alike (unlike the Latinos)

.@JoeBiden: “Unlike the African-American community, with notable exceptions, the Latino community is an incredibly diverse community" pic.twitter.com/CFO4Q40jEI

With his comment today and the others made during the campaign Joe Biden demonstrated that he is not a big fan of African Americans. To him, they are all poor, think alike, and stock supermarket shelves.

One of the things that is utterly shocking is that Joe Biden has made racist statements and supported racist people his entire career, and he’s still considered an icon on the left largely. That’s because he was the Vice President of the first Black President.  But then again, he described that first Black POTUS as “the first mainstream African-American who is articulate and bright and clean.” And Jim Crow Joe praised e praised the “civility” of an arch-segregationist late Mississippi Sen. James O. Eastland.

Racial jungle? If a Republican said that ANTIFA would show up at his house. There are so many more examples of Joe Biden disparaging or passing laws to hurt African Americans or other minorities. Jim Crow Joe encapsulates everything that the left claims that President Trump is but isn’t––bigoted, authoritarian, sexist, angry, too free with his words.

But when it’s time for debate, the moderator asks Trump to denounce white supremacists, Chris Wallace asked the wrong candidate. But Next time what the President should answer is, ‘Yes, I denounce Joe Biden.”