Is Beto O’Rourke Really That Naïve, Or Is He Just Stupid? 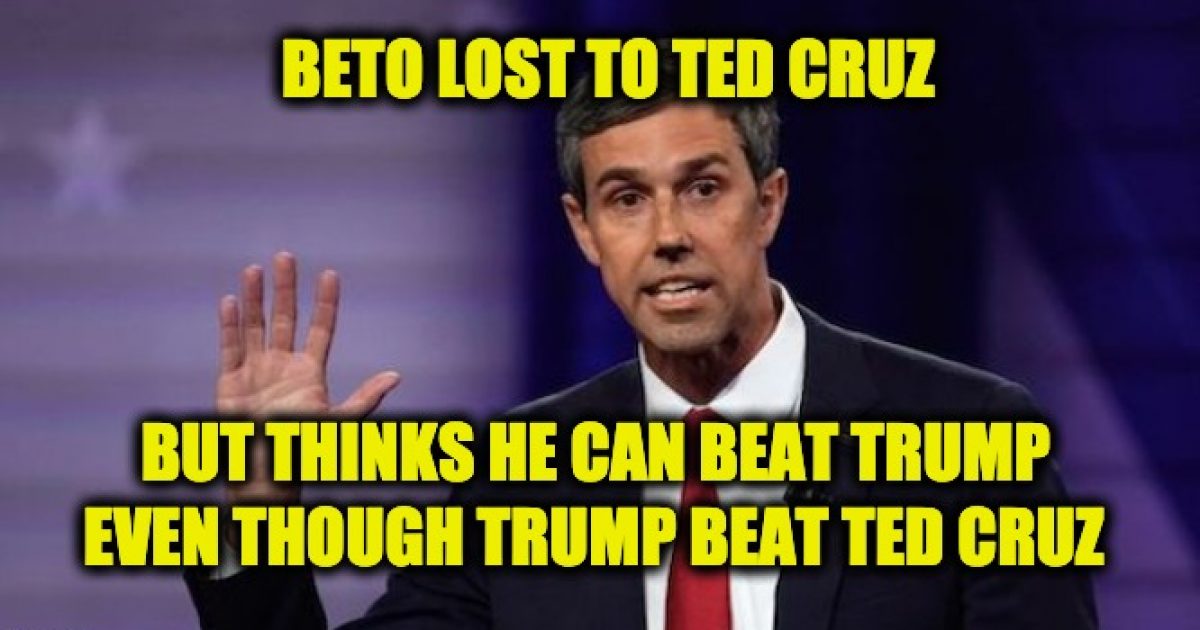 Perhaps the lingering question in the aftermath of the October Democratic presidential is whether former Texas Congressman Robert Francis “Beto” O’Rourke is naïve or just plain stupid (or both). We are talking about a guy with an ego so large that despite the fact that he lost to Ted Cruz in his senate run (thank God) he really believes that he is the one person who can defeat President Trump…the guy who beat Ted Cruz. Beto O’Rourke ban

Now in his repeated insistence that if a law banning so-called “assault weapons” were passed, the millions of citizens who own them would dutifully line up and turn them in.  This guy really believes that Americans will voluntarily give up their constitutional rights (okay the leftist Americans will but the rest of us won’t). Does he think people will willingly give up their guns because he has a Latino nickname? He’s fourth-generation Irish American for Pete’s sake.

In appearances on MSNBC with Joe Scarborough, O’Rourke insisted first that he is “not talking about confiscating anybody’s guns,” and then dove straight into a scenario where guns would have to be surrendered or “there has to be consequences.”But, as noted by the Daily Caller, O’Rourke clings to his belief that turning in guns is exactly what law-abiding citizens would do.

“But my faith is in this country and in my fellow Americans,” he told Scarborough, “following the law and listening to people who own AK-47s and AR-15s, who concede they don’t need it for self-protection. They don’t need it to hunt. Its real true purpose and use is on a battlefield.”

Second Amendment activists have been tilting back in disbelief. First, they note, other countries do not have Second Amendment protection of the fundamental right to keep and bear arms as the U.S. Constitution and some 40 state constitutions have. And, as Scarborough argued with O’Rourke, some people will simply refuse to give up their guns.   Scarborough is wrong, not some, the vast majority of people will simply refuse.

O’Rourke fired right back, as noted by the Washington Examiner, “In that case, I think there would be a visit by law enforcement to recover that firearm and to make sure that it is purchased, bought back so that it cannot potentially be used against somebody else.”

Whatever O’Rourke might call that scenario, it boils down to confiscation by law enforcement of firearms. The Democrat candidate was careful to insist that the gun would be “purchased” by the police, but in the gun rights community, that’s being called “compensated confiscation.” It is the sort of thing that at least some on social media have suggested would lead to a second Civil War. Whether that war would play out in election booths or on urban battlefields, nobody has speculated in that much detail.

But this who notion suggests that for someone who had served in Congress, O’Rourke has a stunning lack of understanding about the Constitution and the law, and he is totally out of touch with this nation’s gun owners. He claims to have talked to owners of AR-15 and AK-47 rifles who said they would surrender their guns, but none of these individuals has come forward to confirm the story.

Possibly the only thing O’Rourke has accomplished is to keep alive the impression American gun owners have, that “Beto” is bonkers, and that he and his fellow Democrats fully intend to confiscate privately-owned firearms.

At least, he may think that’s going to happen. Waiting in the wings is a battalion of attorneys and Second Amendment scholars, supported by rights activists, who have quite the opposite in mind. Something more like this: