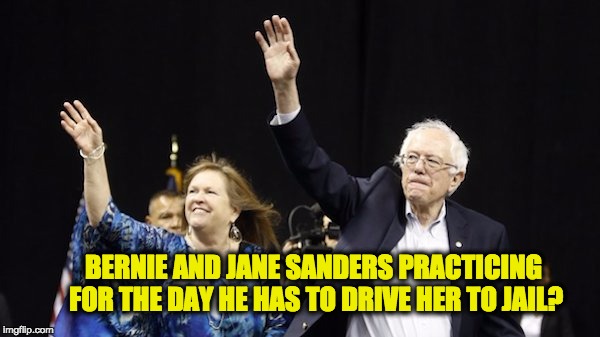 Bernie Sanders played up his hatred of big banks to campaign during 2016 primaries, it turns out that the democratic socialist has more than slightly overstated his fiduciary footwork. It turns out that instead of promising to break up the big banks he should have been auditing his wife’s checkbook.

In the weeks following his capitulation to doomed candidate Hillary Clinton, Sanders came under fire for rumors that he took a massive bribe to give Clinton a wide berth.  Shortly afterward, in a poorly timed transaction, Bernie plunked down a small fortune on a lake house for he and his wife, Jane, who was also stewing in her own brand of financial folly.

Jane Sanders’ troubles began with accusations of bank fraud being levied in her general direction after accounting discrepancies were detected in her work with a local Vermont college.  Now, these allegations are turning even uglier, with Bernie now forced to hire big shot lawyers to keep he and his embezzling bride out of the clink.

“Politico Magazine first reported the Sanders had hired lawyers to defend them in the probe. Sanders’ top adviser Jeff Weaver told CBS News the couple has sought legal protection over federal agents’ allegations from a January 2016 complaint accusing then-President of Burlington College, Ms. Sanders, of distorting donor levels in a 2010 loan application for $10 million from People’s United Bank to purchase 33 acres of land for the institution.

“According to Politico, prosecutors might also be looking into allegations that Sen. Sanders’ office inappropriately urged the bank to approve the loan.

“Ms. Sanders’ push for the liberal arts college’s costly land acquisition was cited in a press release by the college when it shut down in 2016.

“Brady Toensing of Burlington, the man responsible for the claims filed to the U.S. attorney for Vermont, was a chairman for the Trump campaign in his state.

“‘I filed a request for an investigation in January 2016 and an investigation appears to have been started right away,’ he said in an email to CBS News. ‘It was started under President Obama, his Attorney General, and his U.S. Attorney, all of whom are Democrats.’

“‘My only hope is for a fair, impartial, and thorough investigation,’ Toensing added.”

Democratic hypocrisy is nothing new, but the beautiful irony of this particular situation is too prominent to be ignored.

While many left-leaning young voters were too easily wooed by Sanders campaign promises of universal health care and income equality, the truth behind the socialist’s financial acumen could not have been more egregiously overstated.  Now, as we anticipate the possibility of jail-bird Bernie taking this case all they way to the end, we must wonder if the democratic party will run further away from the Vermont Senator, or embrace his criminal wrongdoings in the same manner in which they fell in love with Hillary Clinton.