It's Open Borders Season In Bernie-Land 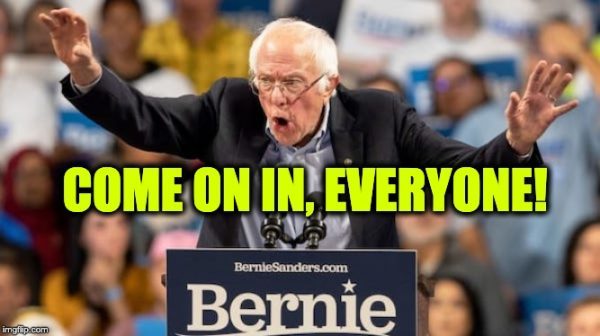 Bernie Sanders has said it often during his campaign to get the Democratic Primary, ‘No one is above the law.” Apparently, he had at least one exception—Illegal Aliens. Bernie’s campaign encourages open borders because his promise to hand out free stuff includes giving those freebies to illegals. Bernie Sanders open borders

And there will be many more Illegal aliens under a Bernie administration as his platform basically supports opening borders:

The Vermont Independent senator pledged “on day one” to sign an executive order that restores and expands DACA protections for 1.8 million eligible young immigrants and their parents, and those with Temporary Protected Status and parents of legal residents. He also wants anyone who arrived in the U.S. before 18 to be eligible for DACA.

He’s promising a moratorium on deportations until the Office of the Inspector General conducts a “thorough audit of past practices and policies.” Sanders says he’ll restructure the Department of Homeland Security and break up Immigration and Customs Enforcement and Customs and Border Protection. Sanders proposes redirecting some immigration enforcement resources to creating labor standards for immigrant workers.

He wants to partner with nonprofits as an alternative to detention centers. Many of his signature proposals, including Medicare for All and College for All, would additionally apply to immigrants, regardless of status.

He would create a $14 billion federal grant program for public defenders and open it to people regardless of immigration status.

Immigration officials say Sanders’ proposals would create an irresistible magnet for millions of the Earth’s migrants who will flood this country. His policies are basically a call for open borders. His push to allow Illegals to get the same benefits as citizens and legal residents leading to an even higher influx of illegals that the U.S. is already facing did generate some objections on Twitter.

1. I’m confused..if you are all for defending the hardworking class people in this country why do you want to extend a program that cost tax money to this same hardworking Americans/legal residents? Instead, of this, why don’t you give the Daca people legal resident status?

And this guy is the Democrat frontrunner.

Illegal immigrants are “entitled” to arrest by ICE.

Just like when a US citizen breaks a serious law they are subject to arrest, lose freedoms, & potential separation from children/family if incarcerated.

There is one more American who objects to Bernie’s stance–Bernie Sanders. In 2015 Bernie said America should be fighting against open borders for Illegals saying,  That’s a Koch brothers proposal.”

Bernie won the caucuses in Nevada, a strong union and a strong Latino state. His comment’s after winning the state about allowing illegals to receive government benefits seem to be pandering when comparing it to his 2015 position.