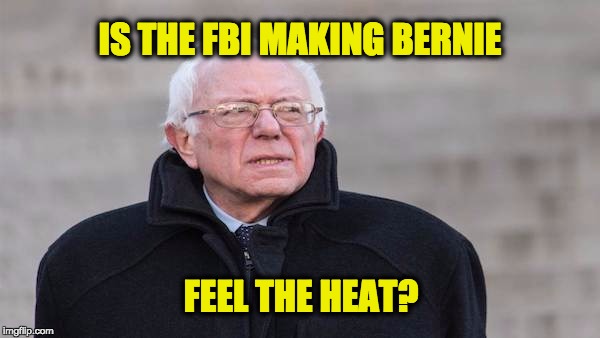 Facebook Twitter Flipboard
Watching Bernie Sanders on State of the Union with Jake Tapper, it seems as if the Vermont Senator was beginning to feel the heat about the investigation of his wife’s finances. And “feel the heat,” is nothing like feeling the Bern. Feeling the heat happens when you look for other people to blame.  Feel the heat happens when you go into a long-winded defense of your wife and don’t mention the most important word “innocent.”

Sen. Bernie Sanders vehemently defended his wife, Jane Sanders, amid an ongoing FBI investigation, saying she is “perhaps the most honest person” he knows.

Tapper: I want to ask you about the FBI looking into Burlington College and a land deal there and financing around it from the time when your wife, Jane Sanders, was president of the college. You and your wife recently retained lawyers. I guess the fundamental question for you is, did you or anyone on your staff reach out to the bank to approve any loans related to this transaction?

Sanders: Absolutely — is of course absolutely not. And in fact let’s be clear, five years — five years after my wife left Burlington College and she left it in better shape than it ever been in.

However three years after she left, the regional accreditor of the college placed it on probation because of its financial condition.

Five years after, guess what happened? Right in the middle of my presidential campaign, I know this will shock the viewers, the vice- chairman of the Vermont Republican Party who happened to be Donald Trump’s campaign manager raised this issue and initiated this investigation.

Liberal-skewed Politico started discussing Jane Sanders’s management failure in 2016, Explaining that Mrs. Sanders, “who led Burlington College from 2004 to 2011, spent millions on a new campus — 33 acres along the bank of Lake Champlain — to attract more students and donations from alumni. It didn’t work: The college failed to recruit enough students or donations to repay its debts and even came close to losing its accreditation.”

But anyone can be a screw up that’s not illegal. What the illegal issue is when she applied for the loan that sent the college off the fiscal cliff, Jane Sanders claimed the college could count on $2.6 million in donations to pay for the purchased land, according to a 2010 loan application. But in actuality she raised only $676,000 in donations over the next four years.

The press began to suspect something was strange much earlier than that. In 2014 The Burlington Free Press reported that some of the school’s financial problems were because “$1,128,662 in “contributions receivable,” most of which comprised pledges due in future years, including an unrealized $1 million estate gift. Sanders had announced that gift in 2011, before she resigned.”

Oh and did I mention that the FBI started investigating Jane Sanders this January, when Barack Obama was still President and controlled the Justice Department?  Therefore there had to be a Democrat who believed there was something there to investigate.

I should also mention to you that just the other day the person who allegedly had made this statement that I had been involved in this land deal refuted it. He said I never said that. That was in a paper in Vermont.

So, you know, I think what you’re looking at is something that Republican National Committee is very excited about. My wife is perhaps the most honest person I know. She did a great job in Burlington College.

Well that might be true. After all he spent much of 2015 and 2016 with people like Hillary Clinton.  Some might believe that Al Capone would seem honest next to her. Certainly one of those big money donors would not consider Jane Sanders very honest.

Corinne Bove Maietta, a member of the famed Burlington Bove’s Restaurant family, said she agreed to give the college an unspecified amount upon her death. Documents show, however, that Sanders put her down for a series of cash payments.

In an interview with VTDigger.org, the blog that broke the story which Bernie claims is a partisan hit-job. Corinne Maietta said she never agreed to make a series of payments to the college while she was alive, as Sanders claimed in documents provided to a bank. Maietta’s pledge and pledges from other donors were used as collateral for the loan

In an interview, Maietta was incredulous that Burlington College would try to use her bequest to secure a bank loan. “You can’t borrow money on the future,” she said. “That doesn’t exist.”

When she heard how her pledge was listed in the loan document, she was surprised. “They had me in increments? No, never,” Maietta said.

Maietta, who was interviewed by a federal investigator at her home in West Palm Beach, Florida, said she agreed to give the school donations in addition to the bequest. She said she gave less than $100,000.

Maietta was adamant that she never signed anything with the college, despite Sanders personally asking her to do so. She said she didn’t include Burlington College in her will until almost a year after the college purchased the diocese land.

So is Bernie suggesting that Corinne Bove Maietta, an 83-year-old registered Democrat, gave the loan to his wife’s school so that Jane and Bernie can get investigated at a later date?

Bernie must be feeling the heat…maybe some investigation burn also, because he’s looking for other people to transfer the blame to others.