Bernie Sanders Says He’s Proud To Be A Jew: But Socialism Is Antithetical To Jewish Teachings 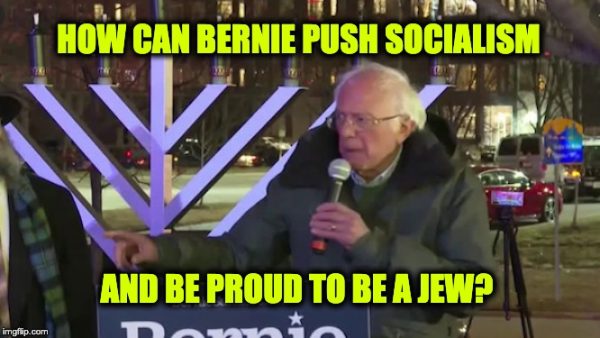 Two weeks ago, Bernie Sanders released a video to say he is “very proud to be Jewish” and that he looks forward to “becoming the first Jewish president in the history of this country.” I am not the Jewish police; therefore, as Bernie’s mother was Jewish, and he never converted according to Jewish law, Bernie IS Jewish. But if he is really proud to be Jewish, Sanders should be spending time studying Jewish theology. Because in many cases, socialism’s teachings are totally antithetical to Jewish teachings. Bernie Sanders Jew

Karl Marx famously said, “Religion is the opium of the people.” Following Marx’s lead, socialism tries to replace God with a socialist Government. It destroys principals that are inherent to both Jewish and American traditions, such as limited government, individual responsibility, and traditional morals.

Let’s start at the beginning, or in the beginning, the creation narrative in Genesis explains that man is created in God’s image.  But we also taught that our maker has no bodily form, so how can that be?

The Bible is not telling us that we are all dead ringers for the “big guy upstairs,” if that was the case, the pictures on everyone’s driver’s licenses would look as lousy as mine. It would probably be impossible to able to get a check cashed, and all of those TV shows about using DNA to solve crimes would be very boring.

“Created in God’s image” is supposed to teach us that just as God acts as a free being, without prior restraint to do right and wrong, so does man. To be Godly, we are expected to do the right thing because we want to do good, not because we are forced to. God does good deeds as a matter of his own free choice, and because we are created in his image, so can man. Only through free choice, can man truly be, in the image of God.  It is further understood that for mankind to have real free choice, he must not only have inner free will but an environment in which a choice between obedience and disobedience exists. God thus created the world such that both good and evil can operate freely; this is what the Rabbis mean when they said, “All is in the hands of Heaven except the fear of Heaven” (Talmud, Berachot 33b). God controls all the options we have, but it is up to man to pick between the correct or incorrect choice.

When it comes right down to it, free will is the divine version of limited government. God picks which is the correct direction and even gives us the Torah as a guide book to follow, but he does not pick winners and losers—it is up to each and every one of us to choose the direction we want to proceed.

Because we all are created in God’s image, Jews believe that “All men are created equal.” This means we all have the same ability to be infinitely good or wicked, or to forge a relationship with God regardless of intellectual capability, social background, physical strength, etc.,. It does not mean, as Bernie’s socialism ascribes to, we should all should have the same results despite our ability. The socialist view would say we would all be Scholars at the level of the Einstien.  And of course, Bernie’s teachings believe as we all should have the same big screen TV, wireless internet, and college–all for free.

In socialism, everybody gets the same “free stuff” no matter what they get done, which is also counter Jewish teachings,

Have you ever noticed that in the Genisis creation narrative after five of the seven days, it says that God “saw that it was good”? The two exceptions are Mondays and Tuesdays. Monday (day #2) is cheated; it gets no, “it was good.” Tuesdays, on the other hand, get called good twice.  On first thought, one might think that God hates Mondays (like much of mankind), but that doesn’t seem right. Besides, it doesn’t explain why Tuesday gets to double-dip. The reason for the difference is God is teaching us that we get rewarded based on what we accomplish.

According to the text, only part of the job of creating oceans gets accomplished on Monday.  Beresheet 1:6 says water is separated on Monday, “Let there be an expanse in the midst of the water, and let it be a separation between water and water.” But the next day God does something else with the water, “Let the water that is beneath the heavens gather into one place, and let the dry land appear,” and it was so. And God called the dry land earth, and the gathering waters He called seas.” Beresheet 1:9-10.

On Tuesday, God finished the water job.  Therefore Tuesday got rewarded, and Monday got bupkis.” This is contrary to socialism, which teaches that everyone gets what they need, not what they earned.

That’s why Hebrew word for charity, “tzedaka,” has in its root the word “Tzedek,” which means righteous because we are taught that personally giving charity is one of the keys to being righteous. Leviticus (25:23) says, “If your brother becomes impoverished and his means falter in your proximity, you shall strengthen him proselyte or resident so that he can live with you.”

Notice it says live with you, it does not say live in a government facility. That’s because the obligation is on the individual. In rare times the community was called on to pick up the slack, but it was never the community government; it was the local Rabbi who would lead the effort.

The Torah directs farmers in the holy land to leave some of their fields unharvested for the poor to feed on. Farmers had to leave corners of their fields unharvested and were not allowed to pick up crops that may have been dropped, and should not harvest any over-looked produce that had been forgotten when they harvested the majority of a field. Those “leftovers” were for the poor. Again the farmers who followed the Jewish law were being Godly because they used their free will to do the right thing.

Some of the ancient rabbis suggested that when the universe was created, sparks of God’s holiness were spread across the earth. Every time that a person makes the choice of performing a righteous act (such as giving charity), one of those sparks is purified and sent back to heaven. Therefore, through the process of doing the right thing, we become closer to our maker.

Socialism takes away that free choice given to us by God.  They believe that left to our own devices, mankind will do the wrong thing (or at least what socialists think is the wrong thing).

In that way,  socialist governments take over the role of God.  They ignore the meaning of created in the image of God, they step in to control our decisions. Socialism takes away our personal choice and gives it to the government –thus retarding our spiritual development and, most importantly, the opportunity to “pick up those sparks” and get closer to our maker.

The Torah also teaches us that we cannot rely on God to bail us out all of the time, the same way socialism teaches that we need to rely on government all the time

There is a rabbinical teaching involving Moses splitting the Reed Sea that teaches this lesson In Exodus (Reed Sea is not a typo in the original Hebrew, says יַם-סוּף which translates into the Sea of Reeds, not Red Sea. Exodus Chapter 14-15 Moses sees the Pharaoh’s troops bearing down on the Israelite nation, who are trapped against the sea.  Moses starts praying to God, but God says, praying, and do something.

“And the LORD said unto Moses: ‘Wherefore criest thou unto me? Speak unto the children of Israel that they go forward.”

That’s the holy talk for “Hey Mo, stop praying and do something!” The Rabbis teach us that when Moses lifted his staff over the sea, the water did not part. The Egyptians were closing in, and the sea wasn’t moving. Moses and the Israelites stood on the banks of the sea, frozen in fear. That’s when named Nachshon took the responsibility upon himself to act; Nachshon just walked into the water.  He waded up to his ankles…his knees…his waist… his shoulders, and just as the water was about to reach is nostrils and possibly drown him, the sea parted.

This rabbinical story teaches us that it’s essential to have faith and believe God may eventually help us. Still, we cannot get that help until we take personal responsibility and act on our own. This, too, is antithetical to socialist philosophy, which teaches that government is the first place to look for help rather than looking at one’s self, family, and community.

On the other hand, socialism teaches citizens that the government will always bear the responsibility of protecting you; there is no individual responsibility, just the collective bailout. Instead of what the Torah teaches, each one of us assuming personal responsibility and using our good deeds to gain closeness to God.  Per our rabbinical sages, following the 613 commandments are the Jewish version of what Thomas Jefferson called “the pursuit of happiness.”

It is God who instilled in us a personal responsibility to do the right thing, and also provided mankind with the choice to accept that responsibility or not. There is no room in our government faith for a government that forces their interpretation of the right thing down our throats.  Per our rabbinical sages, following the 613 commandments in the Torah are the Jewish version of what Thomas Jefferson called “the pursuit of happiness.”

Bernie Sanders may be proud to be a Jew, but I suspect that’s for political purposes only But there is no argument about him being Jewish. That doesn’t change because of his anti-Israel policies or that the fact his campaign is filled with anti-Semites such as Linda Sarsour and James Zogby, and Shawn Scott, just to name a few.

While he is a Jew, the objective of Bernie’s Socialism is the government to supplant the role of God and take away the freedom of choice endowed by our created when we were created in Eden. Taking away that choice that is entirely antithetical to Jewish teaching. That’s why Jews who believe in God, must vote against and campaign against  Bernie Sanders from becoming president. America is one nation under God, not one government that IS God.

If the above isn’t a good enough reason, just remember how Jews fared in the two most infamous socialist countries of the past century the National Socialist German Workers’ Party (Nazi) and the Soviet Union.