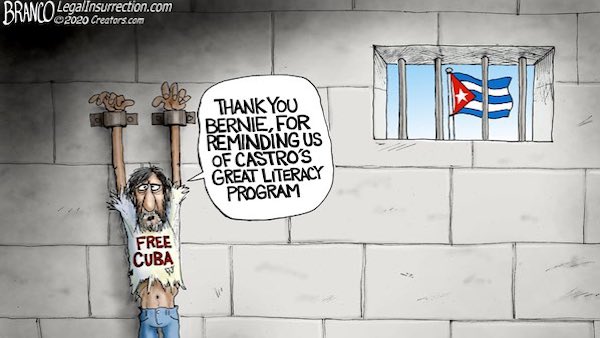 They should know — while Bernie merely admired Fidel’s Cuba… Ted’s Aunt had to LIVE there! And she’s sitting down with Sen Cruz and Mike Knowles to set the record straight. Bernie Sanders Cuba

What is Cuba truly like once you venture PAST any places the government wants international visitors to see?

Did Bernie happen to mention the fact that the Cuban people are all equal — equally poor, that is. Actually, that’s only partly true. The exception being any one of the government-connected fatcats that get to live large with a billionaire’s lifestyle.

Did he mention the fact that Cubans who go back to visit relatives often go with a suitcase full of medicine, clothes and toilet paper? Or that it’s not unusual for visitors to leave their own bras and underwear behind with friends and family because there is not to be had there?

What about that education system Bernie was so impressed by?

Did he happen to mention that they actively tried to expunge belief in any god other than the State… just like so many militant leftists do right here in America? Or that teachers are compelled to teach kids Communist propaganda, and aren’t allowed to quit their job? (Ted’s grandmother’s only way to defy the state order to teach propaganda was to fake insanity.

How about the ‘neighborhood watch’ political hall monitors whose job it was to snitch to the State about anyone thought to be disloyal? Or the way kids were encouraged to turn in their own family members for speaking against the party — even in the privacy of their own home? Based on previous shortages, that home may not have toilet paper.No crap, it’s true.

If the Left works so hard for enlarged government authority and diminished personal freedom, shouldn’t we stop to ask ourselves how well that model REALLY works in practice?

Because — contrary to the left’s popular opinion — it really HAS been tried before.

And the world should think twice about cheering for a massive decline in the American economy. If we collapse, the world we’re connected to goes down with us.

The only people who benefit from THAT scenario are a few well-insulated billionaires who can afford to buy and sell whole countries to further fatten their own wallets and extend their global power base even further, and regional warring factions who could exploit the chaos to settle old scores or pursue private ambitions.

Watch Ted Cruz and his Aunt Talk about the REAL Cuba, not Bernie Sanders’ propaganda, in the video below