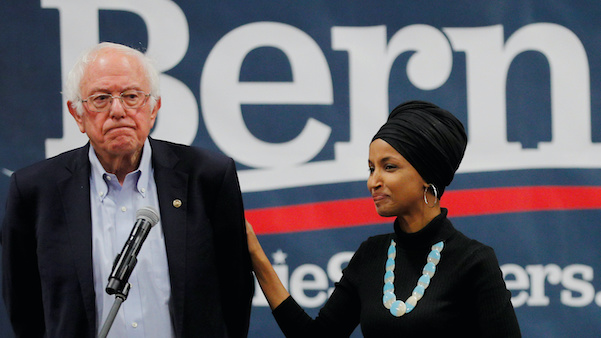 Bernie Sanders’ campaign has been openly embracing a radical group that seeks to ‘abolish prisons’ and has actively promoted a group labeled by the State Department as a terrorist organization.

The leading Democrat candidate for president has not been shy when it comes to embracing lawlessness in America. But his warm reception for the “Dream Defenders” has to raise red flags amongst moderates in his party.

According to the Daily Caller, Sanders has touted the group’s endorsement on his website and even has a co-director of the group on board as a surrogate.

Dream Defenders share many of the goals that Sanders has espoused on the campaign trail – free college, eliminating student debt, open borders, abolishing ICE, and the abolishment of prisons.

? ICYMI: Our co-director @RaGilmer brought @TheBarbaraSmith of the Combahee River Collective, @israhirsi @aja_monet and @KenidraRWoods_ together for a convo with @TeenVogue about black feminism, Bernie Sanders and the world we’re fighting for. ✊?https://t.co/OPdi8Glx5r

The radical group has created problems for other politicians who associated with them and their cause to run roughshod over law and order in this country.

Their website states that the justice system is inherently racist and there is no place for law enforcement or prisons in such a system.

According to the Daily Caller investigative report, Dream Defenders have “repeatedly promoted the Popular Front for the Liberation of Palestine, which has been a U.S.-designated terrorist organization since 1997.”

Democrat Andrew Gillum, who ran for governor of Florida in 2018, was heavily criticized by eventual victor Ron DeSantis, for his ties to the group.

DeSantis blasted Gillum for accepting financial support from the group that has called Israel an “apartheid” state and welcomed the Council on American-Islamic Relations (CAIR) in 2016 despite.

CAIR had been named in 2008 as an ‘unindicted co-conspirator’ in a case alleging a criminal conspiracy to support the Palestinian Arab terrorist group, Hamas.

In 2008 the word GUILTY was read in a Dallas courtroom a total of 108 times as a jury convicted the Holy Land Foundation and each of the associated defendants of raising money to fund Hamas terrorism. Implicated, along with those convicted was supposed Civil Rights organization CAIR, the Council on American-Islamic Relations and scion of the Muslim Brotherhood,  which lobbies the government from its headquarters in Washington DC. Even though CAIR was named an unindicted co-conspirator in the Holy Land case, its leaders are invited guests Network News Programs, where they are usually called upon to whitewash some terrorist act, and now marching in a parade to honor our heroes, some of whom fought in the war on terror.

There is little doubt Sanders will get a pass in the media for accepting an endorsement from a group with such radical views. That said, is this even vaguely surprising?

Dream Defenders are allegedly an anti-Semitic group – Sanders surrounds himself with anti-Semites such as Reps. Rashida Tlaib and Ilhan Omar.

President Trump will have to denounce anybody and everybody who donates to his campaign, but true radicals in the Democrat party get to skate on such associations.