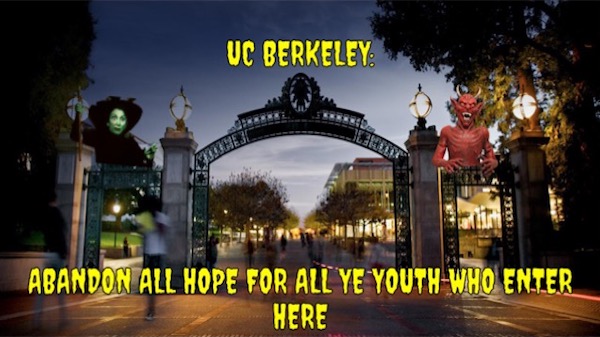 Once again this UC Campus is earning its nickname,  Berserkley, and the students attending the school are causing people to lose hope in our future.

The saga of free speech at the University of California at Berkeley has taken an asinine turn, as student leaders denounce police protection of the First Amendment.

UC Berkeley was the site of one of the most disturbing trespasses against the United States’ First Amendment in recent memory back in February, when students instigated violent riots in order to cancel the scheduled speaking appearance on conservative Milo Yiannpolous.  The unbelievable scene escaped campus and spilled over to the city of Berkeley itself, causing millions of dollars in damage.

Then, when right wing author and television personality Ann Coulter was scheduled to speak on campus, administrators at the college effectively shut down the appearance before it could take place, hoping to avoid a repeat of these New Fascist students running amok.

One solution was to use police officers to ensure that these conservative figures would be able to share their views on campus – a simple action that has been used in all facets of political gatherings since the onset of politics.  This, however, could be “triggering” to minorities on campus, according to snowflake student leaders.

“The third-year Berkeley student told the student publication that the police’s ‘continued, heightened presence re-traumatizes students who come from communities with complicated relationships to the state.’

“’I do not think campus safety must rely on the police,’ she added. ‘I think (UCPD) must be active in recognizing the trauma their presence alone brings to some students and work to limit visibility while remaining an open resource to those who choose to use it.’”

This is indicative of the leftist view on the First Amendment and their lack of appreciation and understanding of the people “in blue” who protect them and their families every day.

Whereas the Constitution is extremely clear and concise on what Free Speech truly is, many on the left have taken umbrage to being offended by what other people say.  This new, leftist interpretation of Free Speech includes an unwritten clause that opinions are only protected by the Constitution if they don’t offend snowflakes and/or other leftists.

While this perversion of the Constitution is absurd on its face, the angry leftists of America have allowed this viewpoint to persist in an effort to stymy conservatives who have recently been emboldened by the election of President Donald Trump.  Similar tactics are being employed by companies such as Google and Facebook to limit Free Speech on their platforms by labeling disagreeing diatribes as “fake news”, and marking them for censorship.

UC Berkeley, who has ironically labeled themselves the “home of Free Speech”, has become nothing more than a joke so convoluted and sideways that the left side of American politics doesn’t understand that they are the punchline.

Much of this post were first seen at Constitution.com