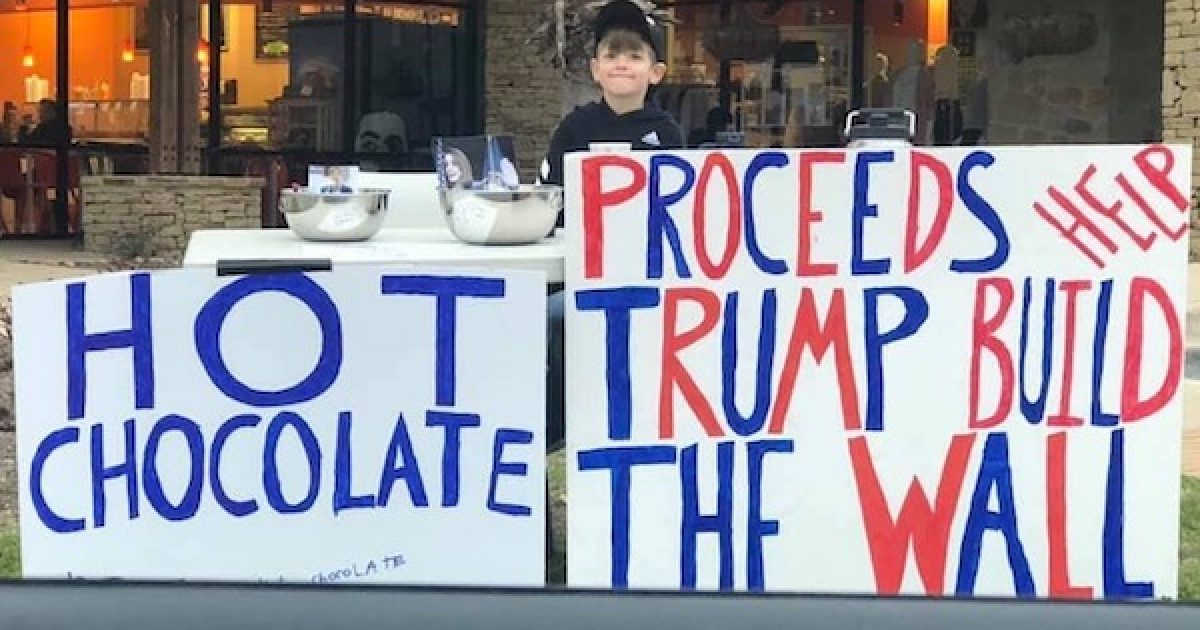 Zachary Fox, an illustrator who is also the founder of Awful Records posted a tweet seemingly showing someone to running down a seven-year-old kid whose hot chocolate stand raised thousands of dollars to help build the border wall.

Since Donald Trump came down the Trump Tower escalators, liberal leaders have demagogued Trump supporters as evil, fascists, Nazis, racists, hatemongers, etc.  Their lemming-like followers have heard their message, using violence and threats of violence to prevent the president’s supporters from “destroying” America and the planet, even if those supporters are children.

Benton opened his stand in February, and through June 3rd of this year, 7-year-old Benton Stevens from Texas has raised $22,000 for the construction of a border wall between the United States and Mexico. He intends to continue to raise money with a lemonade stand this summer. Young Benton even has his own lemonade and hot chocolate brand that he sells online with other products to raise funds for the border barrier.

Zachary Fox responded to the news of Brenton’s success with a tweet featuring an illustration of someone speeding his car towards the hot chocolate stand.

As of this writing, 95,000 people have liked his tweet in less than 48 hours.  But thankfully many hated it, especially after it was reported in the Gateway Pundit, and tweeted out by Gateway’s owner Jim Hoft.

Remember when a trump supporter ACTUALLY ran somebody over in Charlottesville? Yea me too pic.twitter.com/Ni5UDPtIeE

Didn’t you say in that song you wanted to drive your car into white owned businesses ?

Celebrating the implied murder of a child. How is this allowed?

WOOT! I love threatening to kill a 7 year old!

You want to murder a child? Wow the left Is really f@cked up

I don’t think Fox wants to murder Benton and God forbid anyone trying to hurt the child. But its that kind of shameful rhetoric that incites more leftist violence. And the fact that it is directed toward a 7-year-old makes it even more despicable.

Benton’s mom Jennifer told the local Fox TV station, that some neighbors have also spewed hatred at the child,

“There were more supporters than there were non-supporters. However, the neighbors against it were pretty harsh, calling him names, telling Shane and I that were teaching our son to hate, calling us racist,” Jennifer said. “One guy even pointed at Benton and called him little Hitler.”

While some have reported Fox to Twitter, it is doubtful they will do anything.  Based on their track record, if Zachary Fox were a conservative he would be banned from Twitter by now.