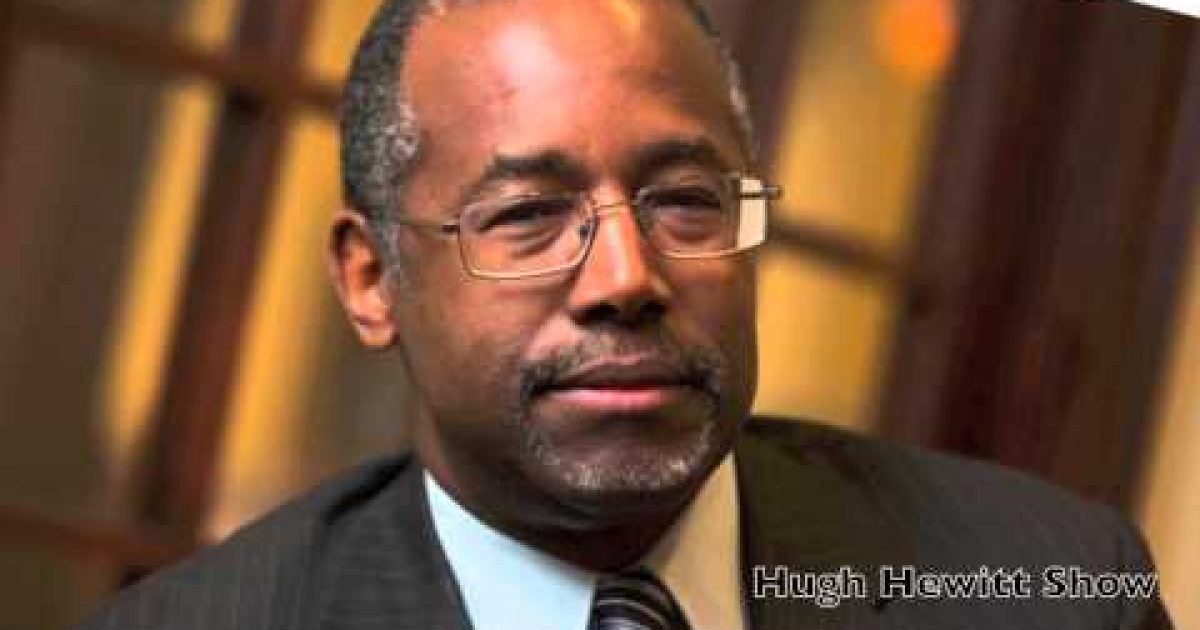 Dr. Ben Carson is a decent man, a smart man, but tonight on the Hugh Hewitt Show he proved something else, he is not even close to being ready for prime time.  Hugh asked him if he was ready to take questions about foreign policy Carson said he was. Sadly Carson failed big time, from the moment he said the Muslims were descended from Esau (it was Ishmael), to not knowing that there were Baltic States in NATO, it was clear that Carson’s decency would not be enough to make him a good candidate especially in a year where foreign policy will be a huge part of the campaign.

Check it out for yourself, below is a transcript and audio of the interview:

Hewitt: Well, the last time I saw you, I wasn’t actually talking to you, because I was on the set of Meet the Press when Chuck Todd was quizzing you. Then I received an email from your PAC saying you’re collecting money, and today I see you in the New York Times. They’ve got a big story, How Do You Solve A Problem Like Ben Carson. So I guess it’s rollout time for Ben Carson’s presidential campaign.

Carson: Well, you know, we certainly are keeping our ear to the ground and carefully watching, and you know, I’ve been very gratified by the response of grassroots people making donations. And we’ll see where that goes.

Hewitt: Now Dr. Carson, I don’t do ambush interviews, but I do believe that the most important job of the president is national security and Defense related. Are you prepared to talk about some of those issues with me today?


Hewitt: First question I always ask every candidate, have you had a chance to read the Lawrence Wright book called The Looming Tower, which is sort of the history of al Qaeda and where it comes from?

Carson: I’ve not read that particular one, but I have had a chance to look at a lot of material on not only al Qaeda, but the radical Islamic movement in general, the kinds of things that motivate and drive them.

Hewitt: What do you consider to be their tap root? What is the origin of their rage, in your view?

Carson: Well, first of all, you have to recognize they go back thousands and thousands of years, really back to the battle between Jacob and Esau. But it has been a land issue for a very long period of time. Possession is very important to them. And one of the things that we’re doing, I think, incorrectly right now is not recognizing that they are expanding their territory. Not only the land that they’ve taken in Iraq, but what they’ve taken in Syria, they’re creating an Islamic state. And we can bomb it all we want. But unless we actually can take the land back, we’re really not doing them any damage.

Carson: I’m just saying that the conflict has been ongoing for thousands of years. This is not anything new, is what I’m saying.

Hewitt: Okay, I would date it to 632, but you’ve got a Biblical connection here that some people may share with you, but I think scholars might dispute. I gather that. Let me ask you, though, in the current manifestation of the Islamic State, what is driving them to act as they are acting? Is it a particular variant of the Koran? What is it that you think animates their barbarianism?

Carson: Well, I believe first of all that they believe that they are the possessors of right. And because of that, anything that is in disagreement with them is wrong and needs to be destroyed. And whatever mechanism they use to destroy it is okay. And that includes some of the things that appear to be very barbaric acts – chopping off people’s heads, burning them. It doesn’t matter, because they are infidels.

Carson: Well, I think right now, our biggest enemies are the group motivated by, that have sprung out of the Sunni radicals. That would be ISIS. And you know, there are a number of sponsored terrorist groups that emanate from the Shiia, which are based primarily in Iran. Right now, they’re fighting each other in Iraq, admittedly. But in the long run, I think they would gladly unite against us in their attempt to destroy the United States, our way of life, and Israel. And we have to be extraordinarily careful about any alliances with them.

Hewitt: Now you’re unique in positing the prospect of a Shiia-Sunni alliance, although they have had some operational tactical alliances during the course of the Iraq war. But they are at each other’s throats right now, aren’t they?

Carson: They are. There’s no question they’re at each other’s throats, and it’s tempting for us to say you know, the enemy of our enemy is our friend. But I do not believe that for one second. I believe that they believe that we are evil, and they want us destroyed.

Hewitt: Are there any circumstances under which you can imagine trusting the mullahs of Tehran with nuclear weapons?


Carson: No. No, because I don’t believe that they operate under the same guidelines as the rest of civilization in the sense that we were able to have some security, because people were afraid of mutual destruction. And I don’t believe that the threat of destruction to them carries the same weight as it does for other parts of civilization. In fact, in their philosophy, you know, becoming a martyr and dying could be a good thing.

Hewitt: So do you rate, then, Iran as a greater threat than, say, Russia and China?

Carson: I think currently, it is a greater threat, because I believe if they are able to acquire nuclear weapons, there’s a greater chance that they will utilize them, or that they will fall into the hands of other terrorists who might in fact use them.

Hewitt: What would you like to see the President order John Kerry to do? Should we break off negotiations in Geneva and recalibrate our sanctions regime? Or should we continue to try and negotiate a halt to the program as it currently exists?

Carson: I have nothing against negotiations, but they need to be very serious negotiations. And the demands need to be met quickly. So if we want to inspect, we should be able to inspect not based on their wants and desires, but based on what we have demanded. And if they’re not willing to comply with those, then why are we playing games with them?

Hewitt: Yesterday, Vladimir Putin gave an interview in which he indicated he was willing to activate his nuclear alert status over Crimea. What do you assess Putin as, in terms of rational actor or a megalomaniac or what?

Carson: Well, I think he’s a very rational actor, because he is sensing weakness. He’s sensing weakness in us and our allies in Europe, and he’s a bully. And I think he has bold ambitions, wants to reconstitute and empire. You know, when he invaded Georgia in 2008, you know, it was thought that you know, this was going to accomplish a limited, military action, and then he would withdraw. He never withdrew. And then he’s taken Crimea and Eastern Ukraine. And I think the only thing that really is stopping him is finances right now. And we should understand that, and we should do everything we can to create more economic problems for him. But then in the meantime, we should recognize what his goals are. And we should be establishing relationships with all the former components of the Soviet Union. We should be strengthening NATO. We should be getting them aligned with NATO. I mean, we need to be proactive. Why should we just wait until he does stuff and then say oh, he’s a horrible person and talk about sanctions again. That doesn’t make any sense.

Carson: I think they would be willing to go to war if they knew that they were backed up by us. I think part of the problem throughout the world right now is that our allies cannot be 100% certain that we’re behind them.

Hewitt: And so should we have that sort of commitment, that if Putin makes a move on the Baltic states, we’d go to war?

Hewitt: Well, the Baltics, they are in NATO. So that’s, we’ll come back after the break and continue that conversation. And Poland’s in NATO, and we’ll talk about what that means with Dr. Ben Carson doing foreign affairs on the Hugh Hewitt Show.