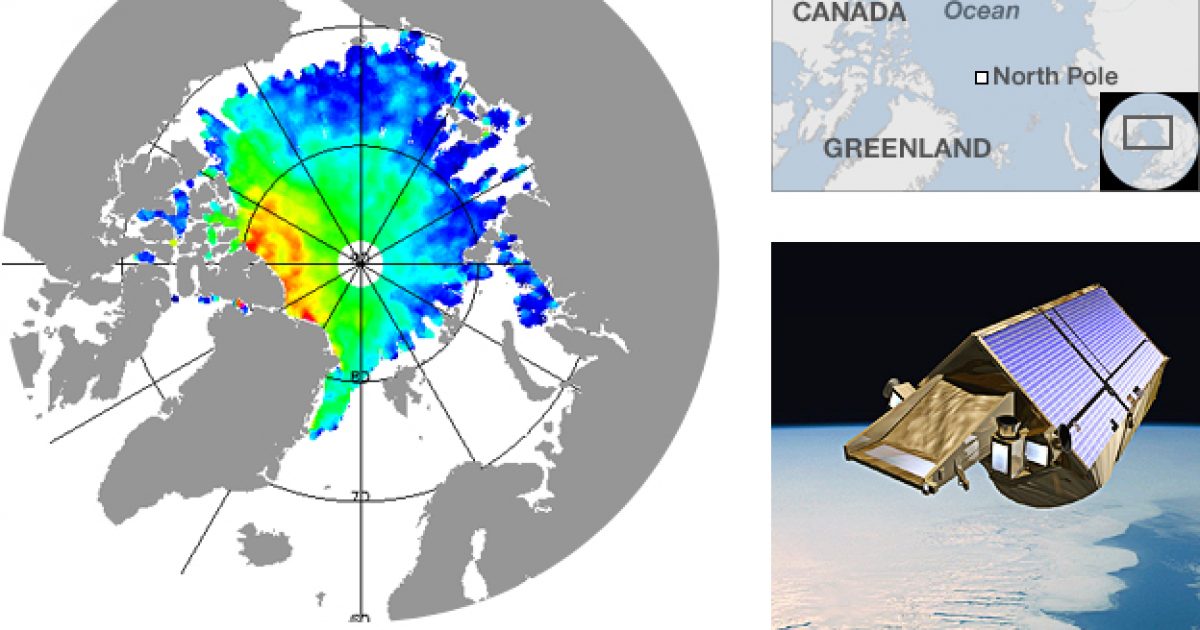 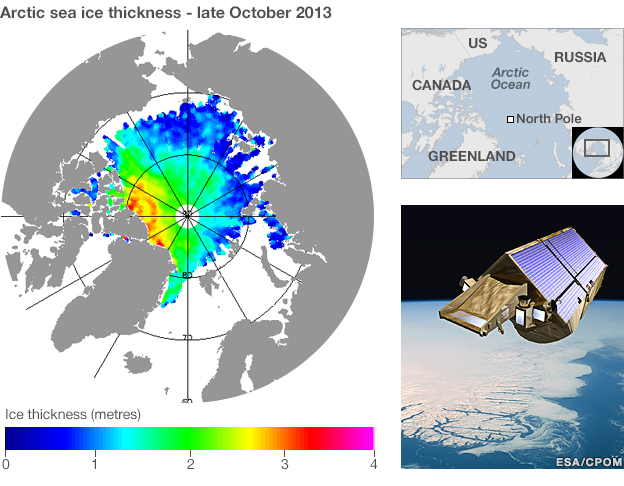 Much to the chagrin of the global warming mafia, the Arctic Ice Cap finished the “summer season” larger than last year but thicker also.

The BBC is reporting that Data from Europe’s Cryosat spacecraft suggests there were almost 9,000 cu km of ice at the end of this year’s melt season. This is close to 50% more than in the corresponding period in 2012.

Of course the global warming scientists are warning that this may be just a one-year occurance:

“Although the recovery of Arctic sea ice is certainly welcome news, it has to be considered against the backdrop of changes that have occurred over the last few decades,” said Prof Andy Shepherd of University College London, UK.

I wonder if he is talking about the fact that the earth hasn’t warmed in the past 15 years.


After a sharply colder summer this year, the autumn volume number has gone up.
Part of this stronger performance can be put down to the greater retention of older ice.

This is evident particularly around the Canadian archipelago and North Greenland, where there is much more two-year-old and three-year-old ice than in previous years.

“One of the things we’d noticed in our data was that the volume of ice year-to-year was not varying anything like as much as the ice extent – at least for the years 2010, 2011 and 2012,” explained Rachel Tilling from the UK’s Nerc Centre for Polar Observation and Modelling (CPOM).

“This is why we’re really quite surprised by what we’ve seen in 2013.

“We didn’t expect the greater ice extent left at the end of the summer melt to be reflected in the volume.

“But it has been. And the reason is related to the amount of multi-year ice in the Arctic.”

Dr Don Perovich is a sea-ice expert at Dartmouth College, US.

He said Cryosat’s data tallied with observations made by other spacecraft. “In previous summers, some of the [multi-year ice] migrated over to the Alaska and Siberia areas where it melted. But this past summer, it stayed in place because of a change in wind patterns. And so there’ll likely be more multi-year ice next year than there was this year,” he told BBC News

Interestingly just the other day The Daily Beast published a n article called “The End of the Arctic? Ocean Could be Ice-Free by 2015” published on Friday, the Tina Brown-led website talks about “temperatures in the Arctic skyrocket[ing]” and “runaway global warming.” Both statements run contrary to the facts.

Someone better tell Santa Claus. First it was polar bears that were threatened by global warming. Now it’s reindeer too. As temperatures in the Arctic skyrocket, reindeer are suffering staggeringly large, rapid population losses. “Herds of reindeer have declined by one-third since the 1990s as their access to food sources, breeding grounds and historic migration routes have been altered,” reports the environmental audit committee of the British Parliament.

The entire planet is getting hotter, but the top of the world is warming twice as fast as the global average. One leading expert, Peter Wadhams, a professor of ocean physics at the University of Cambridge, says the Arctic Ocean could be completely free of ice in summer as soon as 2015. An overheated Arctic in turn threatens catastrophic knock-on effects for the rest of the globe, including more extreme weather; faster sea level rise; and a higher chance of accelerating global warming to where it becomes unstoppable—what scientists refer to as “runaway” global warming.

Folks, if you see Tina Brown, break it to her gently.