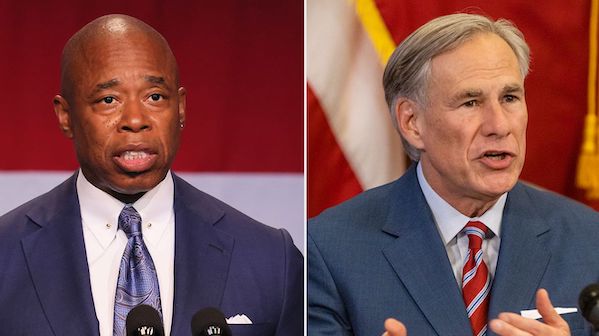 Typical NIMBY Lib is freaking out over Abbott, sending a few busloads of the same people he is so eager to welcome into America.

There is a battle of words between New York’s Eric Adams and Texas Governor Abbott.

Abbott sent a few busloads of migrants to NYC. NYC denounced it as a ‘stunt,’ claiming this was ‘straining the resources of the city… which is a strange position for the mayor of a self-proclaimed ‘sanctuary city’ to take.

The Mayor of a city with a skyrocketing crime problem openly contemplated bringing a bus to Texas, so he could knock on doors in support of Abbott’s opponent, Francis ‘Beto’ O’Rourke.

Because there’s nothing that resonates with ordinary Texans more than some stuffed shirt from an East Coast metropolis telling them how they should think and vote. Between that and the Million-dollar check the Dem challenger just got from Soros, Beto will win over those undecided voters in Texas come November.

Not surprisingly, Abbott dared him to do it. At the 41-second mark, he invokes Clint Eastwood with a go-ahead, make my day response. He’s throwing a spotlight on a problem Biden and his Media apologists have kept silent about, and the left doesn’t like it.

Their Nimby reaction shows exactly how fake their compassion really is. Democrats trying to insist that migrants were somehow tricked or coerced into going there should recall that travel within the US is unrestricted.

These foreign arrivals they claim to care so deeply about were told about these other parts of America and their policies toward new arrivals just like themselves. They freely agreed to go there.

NEW: This is an English version of the voluntary consent waiver migrants sign before agreeing to take a TX bus to Washington D.C. or NYC, Gov. Abbott’s office tells me. They say it’s available in multiple languages, & allegations migrants are bussed against their will are false. pic.twitter.com/bekXjHh1aI

Hizzoner’s outrage is a tacit admission of the real problem at the heart of liberal philosophy: You can have a welfare state or an open border policy, but you cannot have both.

If Eric really wants to see this problem resolved, he should turn his attention to the White House rather than the Governor’s mansion of Texas.

In context — the rest of the story.

For years now, Democrats have been rabidly opposed to any action that might stem the flow of thousands of people cooperating with cartels in bum-rushing our undefended border daily rather than entering the safe and lawful way at a lawful port of entry.

Reports of rapes, murders, the defacto enslavement of migrants, favors owed to drug cartels, hundreds of stash houses, and innumerable instances of human trafficking didn’t cause a moment’s pause for the Democrats whose agenda was leaked years ago by Jennifer Palmieri.

You remember that leak, right? The 2018 memo where the former Hillary Clinton staffer told Dems that the long-term political success of the left hinged on protecting DREAMers? Leaked Memo Shows Impeachment Is Driven By Polling, Not Principle

Biden has refused to enforce our border. It is being badly exploited by criminal cartels who coordinate their actions and use the distraction of mass arrivals as cover to smuggle in people and contraband they don’t want to be intercepted by authorities.

Hundreds of thousands are streaming over the border month after month, and East-Coast Democrats didn’t bat an eye. They didn’t bat an eye until Texas sent a few thousand of these same people, by bus, to self-proclaimed sanctuary cities like DC or NYC.

Suddenly these compassionate Democrats are concerned about the strain these few thousand people might put on sanctuary cities. Texas and Arizona are expected to shoulder the load of supporting upwards of 10,000 people a day without flinching, but New York cries uncle and insists it’s some kind of a political ‘stunt’ when a few thousand TOTAL show up in the Big Apple?

If they’re already crying uncle over something Texas has been dealing with for over a year, so much for New York’s claims of being either ‘tough’ or ‘welcoming.’