Another Crazy Professor Calls For Trump To Die 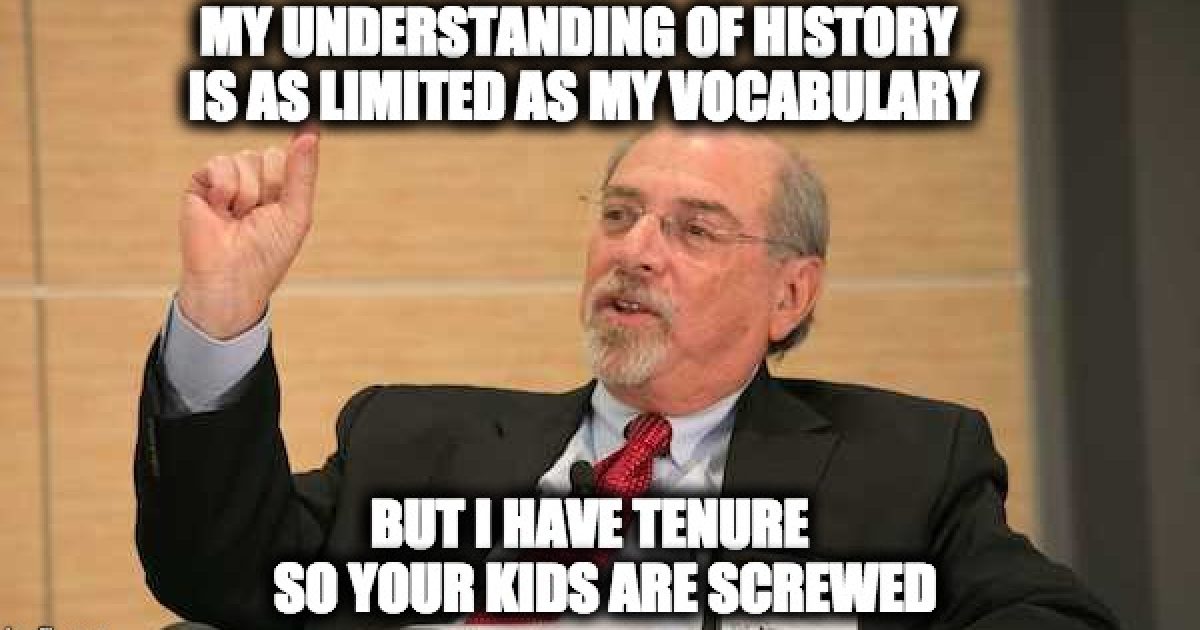 Facebook Twitter Flipboard
If there is any doubt that America’s college aged kids are being exposed to the most radical kind of over-the-line leftist extremism, that doubt should be erased by the rash of college professors calling for the death of the President of the United States since Donald Trump was inaugurated last January. And “whatayaknow” there’s another one in the news today.As reported at Campus Reform, Barry Bluestone, a professor at Northeastern University in Boston, is under fire after he was recorded during a public event saying “wouldn’t mind” seeing President Trump dead.

“This president that we have is really out of control…sometimes I want to just see him impeached,” Bluestone remarked. “Other times, quite honestly—I hope there are no FBI agents here—I wouldn’t mind seeing him dead. But, actually I don’t wa…”

“Of natural causes,” Bluestone affirmed with a nod to his colleague. “Thank you. Thank you.”

Bluestone pointed to the camera and then to Kuttner saying “FBI,” as if to suggest that any FBI agents listening should heed Kuttner’s hasty correction.

Mr. Bluestone’s remarks were recorded in a YouTube video of the entire event which was uploaded by the school on Monday, but once his controversial statements  began to leak out the video was deleted.

In a statement to Campus Reform, Bluestone elaborated on his remarks, saying that while he wants people to “rise up and oppose” Trump, he was not advocating acts of violence.

“In my opinion, Trump is the most dangerous man on the planet because of his power of using lies and half-truths to galvanize his supporters and his ability to command vast military resources,” he explained. “Would I kill him? No. And I normally abhor violence in all forms.”

At another point during the event, Bluestone referred to Trump as a “plutocratic fascist,” a characterization he told Campus Reform he is standing behind.

“He is risking millions of lives by his wreckless global policies, he and his staff have referred to Muslims and Mexicans in terms not unlike Adolf Hitler’s references to Jews, and he now is taking on the militaristic approach of Stalin and Hitler in wanting to have a massive Military Parade showing off our soldiers and weaponry,” Bluestone contended.

“In my opinion, Trump is the most dangerous man on the planet because of his power of using lies and half-truths to galvanize his supporters and his ability to command vast military resources,” he said. “Would I kill him? No. And I normally abhor violence in all forms.”

Granted Bluestone has spent most of his life in the Boston area, meaning that he needs to be a radical lefty to survive, but the 73-year-old professor teaches political economics n the school of Public Policy and Urban Affairs. He must understand history as part of his disipline. Here’s some history he doesn’t understand. For Trump to be likened to Hitler he had to have done one or all of the things that Hitler did, like forcingpeople to put tattoos on their arms, crowding them in to death camps where they suffer torture till they were eventually gassed, shot, thrown in ice water, or died some other horrible death. That would have to be  followed by mutilating their corpses by taking out what can be reused like gold teeth or prothstetic limbs. Until Trump does any of that equating him to Hitler  not only false and inappropriate, cheapens the memory of the people who suffered during the Holocaust and those who try to honor their memories, and shows Bluestone to be deficient in history and/or vocabulary to teach on the college level.

When Bluestone was growing up, children were taught to honor the office of the president (as was I years later). Of course it’s proper to disagree with a president’s policies, but it’s not okay to call for a president to die, or to relate him to some of the most evil men who ever lived, that’s hyperbolic and shows a disrespect for the office of President.